Wikkid Starr featuring band founder and lead vocalist Toney Richards have announced that they have parted ways with drummer Joe Rokker while emphasizing that they do not want to comment any further in that regard. 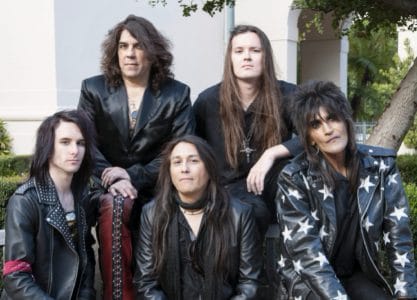 Madshaad Madison will be the ☆WIKKID STARR☆ drummer for both the Whisky Show tomorrow night July 24th and the Petie’s Place Show in Tarzana, CA. on Sunday July 28th.

WE want to make it perfectly clear that we will not make any further comments regarding this situation. WE have moved on and out of respect for all parties involved WE feel that this is the best approach to take. WE hope that every journalist reads this official statement carefully. ☆WIKKID STARR☆ still plans on performing in New York on August 9th, 10th & 11th. WE are consulting with reputable people we know, as to how to proceed with this unfortunate situation. WE will be holding auditions for a permanent drummer once we return from New York. Once again, please don’t ask us any more questions on what happened.

WE have moved on and our old band mate has moved on. See You All tomorrow night July 24th @ The Whisky with WILDSTREET & headliners SALEMS LOTT in what promises to be one of the best shows of the summer season. As always, WE thank each and everyone of you for your support. It’s you the fans that WE cherish….without you the music scene would be non-existent. Tomorrow Night we turn the decibel level up and tear the roof off the Whisky ????? LET’S DO IT…!!! — feeling determined in Los Angeles, California.”

WIKKID STARR -OFFICIAL GET IT, GOT IT, GOOD