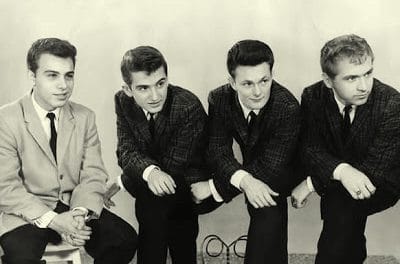 Society Of Rock has recently published an article about an early song featuring the one and only Ronnie James Dio from when the powerhouse singer was only 19 years old. The group Ronnie Dio and the Red Caps released a single entitled “An Angel is Missing” / “What I’d Say” back in 1961, which had Dio singing doo-wop tunes. Wikipedia states the following about Dio‘s early years in the music business (with slight edits):

In 1958, the band again changed their name from Ronnie & The Rumblers to Ronnie and the Redcaps. Musci left the band in 1960, and a new guitarist, Dick Botoff, joined the lineup. The Redcaps released two singles: The first single was “Conquest”/”Lover” with the A-side being an instrumental reminiscent of The Ventures and the B-side featuring DeWolfe on lead vocals. The second single was “An Angel Is Missing”/”What’d I Say” which featured Dio on lead vocals for both tracks.

Explanations vary for how [Ronnie] Padavona adopted the stage name “Dio“. One story is that Dio was a reference to mafia member Johnny Dio. Another has it that Padavona‘s grandmother said he had a gift from God and should be called “Dio” (“God” in Italian), although this was debunked by Padavona‘s widow, Wendy Dio, in a February 2017 interview. Padavona first used the name on a recording in 1960, when he added it to the band’s second release on Seneca. Soon after that the band modified their name to Ronnie Dio and the Prophets. The Prophets lineup lasted for several years, touring throughout the New York region and playing college fraternity parties. They produced one single for Atlantic and one album. Some of the singles (such as “Mr. Misery”, released on Swan) were labeled as being by Ronnie Dio as a solo artist even if the rest of the Prophets contributed to the recording. The group released several singles during the following years until early 1967. Dio continued to use his birth name on any songwriting credits on those releases.

In late 1967, Ronnie Dio and the Prophets transformed into a new band called The Electric Elves and added a keyboard player. After recovering from a deadly car accident in February 1968 (which killed guitarist Nick Pantas and put Dio and other band members briefly in hospital), the group shortened its name to The Elves and used that name until mid-1972, when it released its first proper album under the name Elf. Over the next few years, the group went on to become a regular opening act for Deep Purple. Elf recorded three albums until the members’ involvement recording the first Rainbow album in early 1975 resulted in Elf disbanding.”

Ronnie Dio and the Red Caps‘ “An Angel Is Missing” song:

Ronnie Dio and the Red Caps‘ “What I’d Say” song:

Ronnie and the Red Caps – What I’d Say

Ronnie and the Red Caps – What I’d Say ( Vinyl Rip ) Though I am not a DIO fan, uploaded for others to enjoy