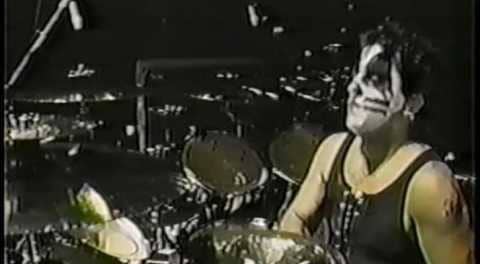 It’s been 20 years since KISS drum tech replaced drummer Peter Criss for one night at a KISS concert at the Civic Center in Columbus, Georgia, USA on April 5, 1997.

The KISS reunion with original band members Paul Stanley, Gene Simmons, Criss and Ace Frehley that started in 1996 was going full on but there were starting to be some issues once again. 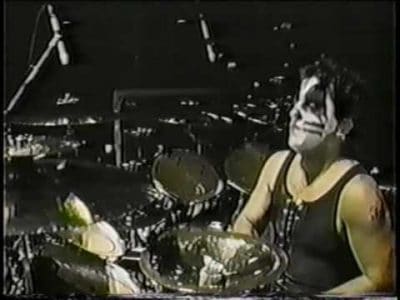 In an interview with Roppongi Rocks posted back on September 19, 2016, Kanon explained what happened:

Well, we – the crew – were doing our normal routine. We had the stage set up, and ready to go for the band’s soundcheck. We were waiting extremely long for them to show up. They are usually pretty prompt with their schedule. They have managers around them keeping them on time. After quite some time, the vans that they were riding in pulled into the venue. I see the band party walk directly into the dressing room area instead of coming to the stage. The band’s manager Doc McGhee, came onto the stage. He walked right up to me. He had an unusual look on his face. He said ‘Nice goatee’ and then said ‘Shave it!’ I still wasn’t quite sure what was going on. He told me to come with him. We walked to the dressing room. Paul Stanley was in there. He came up to me and said ‘We have good news and bad news. Bad news is Peter can’t do the show tonight. Good news is, you are.’ I asked what was wrong with Peter. He said his arms were bothering him and he couldn’t play. He said it was too late to call off the show. Without really thinking about it, I said ‘OK, I’ll do it’.

I didn’t have time to really contemplate it. It was time to start getting into makeup. As Tommy Thayer did my makeup, and David Mathews did my hair, I had a set list in front of me. I was going through the beginnings, and endings of songs. I felt pretty confident that I could pull it off. So then we are all in makeup, sitting there ready to go onstage. Gene was nervous. I could tell by his body language. Paul was making jokes, and keeping it lighthearted. Then, we start the walk to the stage. Once we got onstage, behind the KISS curtain. There I was in the Catman costume, looking down at the three original members of KISS looking at me. It was very surreal. Then it started: ‘Alright, Columbus! You wanted the best…’ And then the show started.

We started with ‘Deuce’. It took a second to get used to everything. The pyrotechnics were extremely loud. Smoke all over the place. A lot of people screaming and cheering. All that good stuff. Once I settled in, it was rolling along quite smooth. All you have to do is watch Gene. He is great with hitting all the cues. He makes eye contact a lot, and keeps you locked in together. Song after song, we hammered through the set list. It seemed to go really quickly when you are up there doing it. The adrenaline pumping and the crowd going nuts make it move pretty fast. Then, we are on the last song, ‘Rock and Roll All Nite’, and I was glad that I was able to successfully get through the show without any problems.”

In terms of how Criss felt about him stepping in, Kanon stated: “From what I understand, he was a bit upset at first. Then once it did happen, he lightened up. He actually told me ‘Good job’ and we got past it. Ace was mad too. He didn’t want to play without Peter. Once we got rolling, he was OK with it too. Paul and Gene really have a ‘The show must go on’ attitude toward the whole thing. It’s really commendable.”

You can read the rest of the interview with Kanon at Roppongi Rocks.