The M-Pre Party organized by Dave Dillman of D-Toxin Productions will start booking bands for its ninth edition starting on November 1, 2017. The M-Pre Party traditionally takes place the night before the first day of the M3 Rock Festival in Columbia, Maryland, USA and unlike the M3 Rock Festival, it mostly caters to young and upcoming bands that are handpicked by Dillman himself. M-Pre Party alumni include perennial Sleaze Roxx favorites Diemonds, Station (who 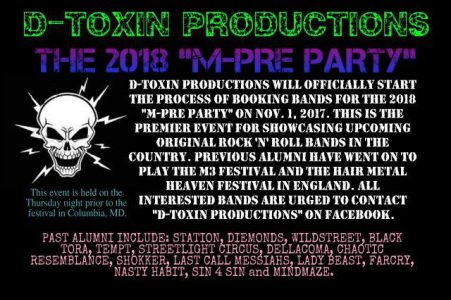 played the actual M3 Rock Festival in 2017 after playing the M-Pre Party four years in a row and Mach22 (whose Like My Chances EP landed the #1 spot on Sleaze Roxx’s Top Ten Albums of 2015).

Dillman posted the following message on the M3 Rockers‘ Facebook page earlier today: “It is about time to start thinking about a lineup for The 2018 “M-Pre Party”. The search for bands is about to begin.

If you have not attended this event in the past… ask others members of this group about the show. It is always the perfect way to kick off the festival weekend.”

Sleaze Roxx spoke to Dillman back in January 2016 and asked him what prompted him to organize the event. Dillman stated: “I actually thought there was a void that could be filled by the ‘M-Pre Party.’ There are so many hard working younger bands that hold true to the ’80s hard rock/glam/sleaze sound that need to be heard. I wanted to give people who love the same type of music that I do an opportunity to see some of these young bands. I also wanted to give these bands a chance to get their music heard. It’s a win/win for both the bands and the people who attend.”

In terms of the criteria that Dillman sets out to choose each year’s M-Pre Party line-up, he stated: “I pretty much stick to the same criteria each year as far as what I look for to fill the ‘M-Pre Party’ line up. First and foremost, the bands must have original music and deliver live. I also have to like the bands myself. I would love to be able to say that money didn’t have anything to do with it… but I can’t. The line up each year does have to work financially.”

Diemonds performing “Rock Inc.” and “Loud N Nasty” at the M-Pre Party at Sonoma’s in Columbia, Maryland, USA on May 2, 2013:

diemonds playing at sanoma’s the night before the m3 rock festival in columbia maryland 5-2-13′ you can download this video at http://www.smartermarkvideo.co…