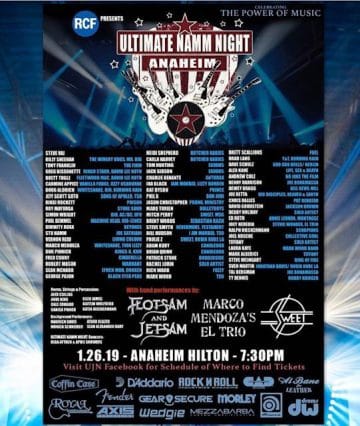 Over 80 performers will present a show that is dedicated to portraying the power of music and its diverse reach. The event will showcase many different genres of music including Latin, Funk, Rock, and Metal and portray the mission of Ultimate Jam Night – bringing people together through the power of music.

As is its custom the show is offered free-of-charge with tickets available at select times during the NAMM convention, details of which can be found on facebook.com/ultimatejamnight.

Founded in 2015 by Quiet Riot’s Chuck Wright, Ultimate Jam Night is community-oriented event that features live unrehearsed performances by some of music’s greatest talent, charitable-giving, comedic interludes, walk-around characters, and other entertainers. It is presented each week free-of-charge at the famed Whisky A Go Go in Hollywood, California. For more information please visit facebook.com/ultimatejamnight or ultimatejamnight.com.”