In a surprising twist of events, 21st Century Goliath have parted ways with their singer and frontman Tony Leone right in the middle of one of the band’s biggest tours in the USA.

21st Century Goliath have made the following announcement just hours ago via its Facebook page:

“Brace Yourselves. We have some very sudden and unfortunate news: we have decided to part ways with singer Tony Leone. We tip our hat to the man who has been the voice of our band since our inception, but his path and ours must now diverge. Unfortunately this means our short term shows will have to be postponed, including our homecoming show tomorrow night at Uncle Buck’s. It sucks, because we really wanted to play for you all. Fear not though, we’ve got a plan for the time being and we’ll be working to implement it as soon as possible. I know it’s gonna be a tough pill to swallow for a lot of folks, but in the end we felt it was the right call.” 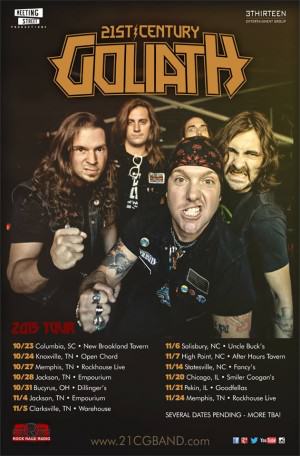 A couple of weeks ago on October 24, 2015, 21st Century Goliath had just made one of their biggest announcements from a tour perspective when it was stated:

“OFFICIAL TOUR ANNOUNCEMENT: 21st Century Goliath and Meeting Street Productions have partnered with Rock Rage Radio and 3Thirteen Entertainment Group to bring our rock and roll madness to YOU! Several dates have already been announced and we’ll be adding several dates over the coming weeks. We’re headed all over the country, so be sure to check in often for venues and details. If you wanna see 21CG in your town, LET US KNOW! Post the hell out of this and share folks. Your boys are coming to see ya’.”

The North Carolina rockers rose to prominence in the eyes of Sleaze Roxx when it landed the number seven spot in Sleaze Roxx’s Top Ten Albums of 2012 with its debut album Radio Destroyer. Sleaze Roxx stated in its review of Radio Destroyer: “I’ve had this disc for a couple weeks now and liked it so much after the very first listen that I decided to step away from it… just in case 21st Century Goliath caught me in an unusually good mood. After several more listens I can confirm that my first impression was bang on — this debut album is a shit-kicking good time from beginning to end.” Sleaze Roxx went on to conclude: “Sometimes bands set themselves up for failure by choosing a moniker that they could never live up to. However in this case the 21st Century Goliath‘s are every bit as ‘gigantic’ as their name suggests, not to mention the could actually destroy radio if any of them had the guts to play music this good. How about giving a young independent band a helping hand and picking up this disc — trust me, you won’t regret it.”