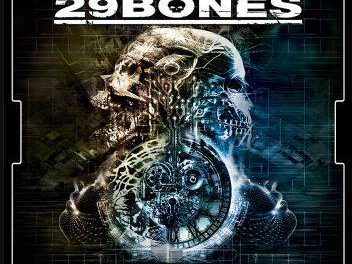 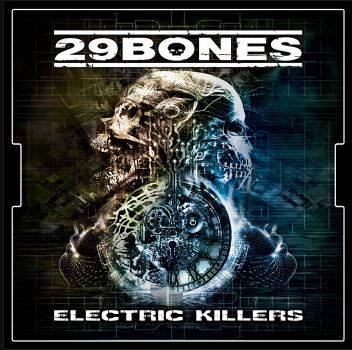 The group’s “Story” on its Facebook page indicates in part (with slight edits):

“29Bones are a blend of heavy metal and heavy rock, combining heavy groove riffs and melodic phrases with elements of hammond-style keyboards providing an additional layer of thickness. Inspired by artists such as Ozzy Osbourne, Metallica, Spiritual Beggars and Down….

Founding member Anthony (ex-Crimsonfire) wanted to write the “kind of music that punters would bang their head and raise their beers to.” Wife and keyboard player Dianne (ex-Crimsonfire) was on board with the new project and wanted to combine both keyboard and rhythm guitar elements into the mix. Putting the word out for a drummer, long-time friend Gus (Diamond Foxx / Sunslave) answered the call and brought with him bass player Besta (Diamond Foxx, ex-Elemada) from a previous project. So the foundations of writing their new music began whilst commencing the search for a suitable frontman for the new group. In 2015, Anthony and Dianne were at a show and watched a stellar vocal performance by frontman Brock (ex-Path of Destruction / Overthrone). Anthony made no hesitation in contacting Brock and introducing him to the band. In 2016, the band line-up was complete.”

From the 2018 album release “Electric Killers”www.29Bones.comhttp://www.facebook.com/29boneshttp://www.instagram.com/twentyninebones29https://29bones.bandcam…