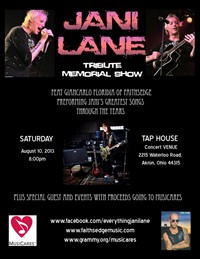 The 2nd annual Jani Lane tribute/memorial show will take place in Jani’s hometown of Akron, Ohio on Saturday, August 10th at the Tap House Concert Venue with all proceeds going to MusiCares.

Giancarlo Floridia of Faithsedge will be playing a full set of classic Jani Lane songs, and also some very rare ones, spanning all era’s of Jani’s time in Warrant. Joining Floridia at the tribute show will be special guests that have yet to be named.

Jani Lane was found dead at the Comfort Inn hotel in Woodland Hills, California on August 11th, 2011. The L.A. Coroner’s Office concluded he had suffered from acute ethanol poisoning. Investigators found a half-empty bottle of vodka and prescription medication in the motel room where Lane died.

MusiCares provides a safety net of critical assistance for music people in times of need. MusiCares’ services and resources cover a wide range of financial, medical and personal emergencies, and each case is treated with integrity and confidentiality. MusiCares also focuses the resources and attention of the music industry on human service issues that directly impact the health and welfare of the music community.