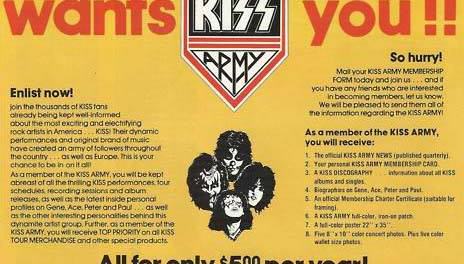 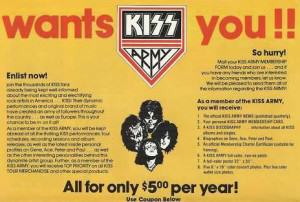 Forty years ago on November 21, 1975, the KISS Army was founded by Indiana natives, Bill Starkey and Jay Evans, after a local radio station refused to play KISS. The KISS Army is the Official Fan Club for the band and is also the name used to refer to the group’s legion of fans.

To celebrate their 40th year anniversary last year, KISS released a greatest hits compilation entitled KISS 40. Sleaze Roxx stated the following in its review of KISS 40: “I do admit that the KISS 40 concept is a good one. To celebrate their 40 years of existence, KISS have offered 40 songs, each one coming from a different album. Although I have read a few reviews giving props to KISS for altering their usual greatest hits song selection, the reality is that they have pretty much offered their usual core set with a few different tracks. KISS‘ secret is not earth shattering — by offering a whopping 40 songs there are sure to be a few that have never made their way onto a KISS hits release before.”

Sleaze Roxx further commented in its review: “Given that there is only one unreleased song on KISS 40, there is not that much to talk about that has not already been said. “Reputation” is the most intriguing track given that it has never been released by KISS in the past. The demo is a classic upbeat Gene Simmons penned and sung tune that would have fit very nicely on Rock And Roll Over or Love Gun. The “God Of Thunder” demo performed by Paul Stanley is a nice addition as it is only available via The Box Set, which is likely harder to find than some of KISS‘ other releases. If anything, it makes you appreciate how Simmons really takes the song to another level when he handles the lead vocals on the version that was ultimately released on Destroyer and Alive II. There are also three live tracks that originate from the hard to find albums KISS Instant Live (“Deuce”), Alive 35 (“Cold Gin”) and Sonic Boom Over Europe (“Crazy Crazy Nights”). After those five tracks, it really comes down to whether you like the song selection of KISS 40 and want to pay to receive the same hits you likely already have.”