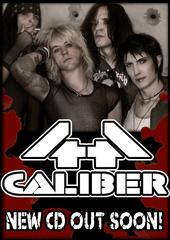 Sweden’s 44 Caliber are finally done with the recordings of their second CD and are really satisfied with the result!

According to bassist Nikke, “recordings took place at Overlook Studios inGavle 081126 – 081203 with William Blackmon behind the gears and levers(just as the the last time).

He made a premastering of the CD as well but we’re probably gonna haveit mastered at cuttingroom as well. Print is due in january / february2009. We have also launched a new design on our myspace that willfollow the theme of the new CD (made by yours truly, Nikke).

We arealso happy to announce that we will upload three or four new songs onour myspace within the following days. So keep your fucking eyes on thehorizon cause you dont wanna miss this!

Wehave arranged all the new songs as if played by two guitarists so takeyour chance now to apply for the second stringshredding spot! Auditionswill be held continuously duting the following months.”