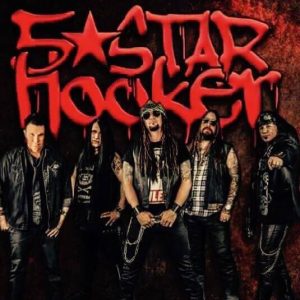 Central Florida based, 5 Star Hooker, have just released a new video montage for their single “5 Star Hooker.”  A five song EP should be available soon while the band works on a new full length album.

Talking to Sleaze Roxx, the band states, “We aren’t afraid to bring it with melodic grooves and hard hitting lyrics. The band’s sound is high energy rock with the fun, rowdy, rock-n-roll vibe in their music and live performance.”

5 Star Hooker were hand selected to perform at the Rocklahoma 2016 Music Festival after performing for a music industry panel at the 2015 Rock Solid Pressure Industry Showcase. The band has shared the stage with many national acts and has just begun to make their mark.