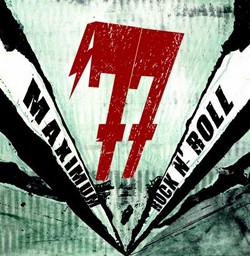 ‘Maximum Rock N’ Roll’ was recorded at Gutterview Recorders, in Stockholm from the 17th to 28th of March 2013 and was produced by Fred Estby and Nicke Andersson. It was mastered by Hoffe at Cosmos Mastering, Stockholm.

‘Maximum Rock N’ Roll’ is definitely an album title that speaks for itself. “We tried to harden the style and sound we achieved with High Decibels with even more powerful riffs and catchy choruses. This is an honest album, ’77 doing what we do best, play together rock and roll songs.”

The band is also happy to offer new ideas, “We kept expanding the sound of the band though, ‘Jazz It Up’ or ‘Don’t You Scream’ are good examples, as they are really different songs and something we’ve never approached before. Another example of this to bring the band’s sound to new shores is ‘You Bore Me’, a song featuring LG (Valeta, guitarist) on vocals for the first time on record.”

“We obviously wrote music in typical ’77 fashion such as ‘Down And Dirty’ or ‘Stay Away From Water’, tunes that will make you bang your head and raise your fist in the air while singing the choruses. Once more we recorded live in the studio, supervised by Fred Estby this time behind the mics and mixing desk, and we are really happy with the sound we got: no tricks, no FX! Just Maximum Rock and Roll played as loud as possible”