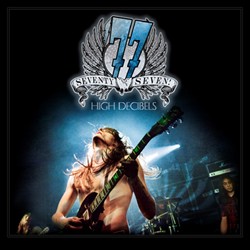 ’77 To Release ‘High Decibles’ On February 28th In North America

The band describes it as even more ‘authentic’ than its predecessor. “This album is more electrifying, direct and noisy than the debut with a good old sound, recorded live in the studio without effects, tricks… just the whole band playing in a natural and wild way, you can hear feedbacks, noises, etc,” states the band.

“High Decibels”, the first track of the album, is a song that deals with “doing the things you want to do in your own way and as you want it” which perfectly represent ’77’s writing behavior since the band’s early days. A recent Sleaze Roxx review stated, “Following the path set out on their 2009 debut album ’21st Century Rock’, ’77 stick to a proven formula — that being AC/DC riffs, Bon Scott inspired vocals, and a collection of intensity driven rock songs. Who cares if this album is a rehash of a sound that was fresh was back in the late ’70s, back when guitars ruled and a nasty attitude was abundant — it is the sound of energy and unpretentious hard rock.”

Heavily swamped in the 70s sound, ’77 have often been compared to Bon Scott era AC/DC and the band really don’t mind such comparisons as their musical behavior is genuine and pure. Each band member lives for that kind of vintage sound.

Still, the band walks away a bit from their regular songwriting pattern with the last album track, “Promised Land”. the longest song of the album, a kind of “mini opera” about the early days of the band when they lived in London trying to survive, playing wherever they could, making no money, and had very little future. The track features Backyard Babies’ Nicke and Dregen as guest vocalists.

’77’s live shows are always scorching live performances and the band will soon announce a series of European dates in support of ‘High Decibels’. Visit www.facebook.com/BigSmokerPig and www.myspace.com/seventysevenrocks for more information on ’77.