Big news for Perris Records and fans of Dangerous Toys, Dirty Looks and Broken Teeth as the band 99 Crimes fronted by guitarist Paul Lidel will be releasing its debut full-length self-titled album via Perris Records on April 5, 2019. 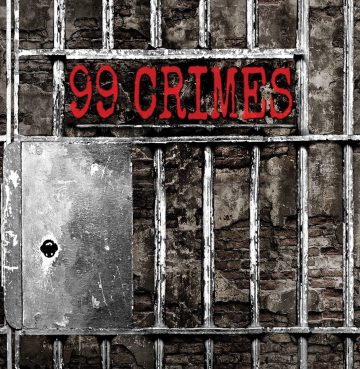 “Perris Records president Tom Mathers is proud to announce the signing of 99 Crimes to their “self-titled” release on April 5th worldwide. 99 Crimes is an original power rock trio band based out of Austin, Texas featuring Paul Lidel of Dangerous Toys, Dirty Looks and Broken Teeth fame on lead vocals & guitars. Chris Jordan (M!ss Crazy) is behind the drum kit and Jeff Lynn is on bass guitar and backup vocals. Jeff Lynn is also featured on lead vocals for the song “Avenue”. Drawing from their varied experiences, they have forged a unique blend of audio styles and textures reminiscent of the early days of heavy rock. No glossy glam here, just adrenalized vocals, face melting guitar, and a rhythm section that registers on the richter scale! Fans of Dangerous Toys, Dirty Looks & Broken Teeth will enjoy this hard rock release.”

Sleaze Roxx stated the following in its review of 99 Crimes‘ debut self-titled EP:

“As you might expect from Lidel, you are getting some old school no frills rock n’ roll and his voice has a real retro ’70s feel to it. Lidel‘s guitar playing is solid and he doesn’t overplay on the songs. There isn’t one weak track on this album. In fact, all the songs are really good. It’s one seamless listen from start to finish although there’s probably no “hit singles.” The best tracks are definitely the lead single “Coming Down Like Rain” which also gets the video treatment and the riff oriented “9 Pound Hammer.”  It’s always difficult for a non-fronting band member to step out of the shadows of a successful cult like favorite band — in this case, two successful cult like favorite bands — to take the reigns and front his/her own project but Lidel has done a great job with 99 Crimes. I am now a true believer that Lidel could have forged (and still can) a music career as frontman in a rock n’ roll band.”