KISS fans will be getting the chance to see another Frehley’s Comet mini-reunion as Ace Frehley will be joined by his former bandmates and current Return of The Comet band members, John Regan (bass), Tod Howarth (leas vocals, guitar), Richie Scarlet (guitar) and Steve “Budgie” Warner (drums) on Day Two of the two-day 9th Annual Kruise Fest in Miami, Florida, USA, which takes place on October 28 and 29, 2019.

“This October, sailing out of Miami, Florida, the 9th annual KISS Kruise will take to the high seas with over 3,000 KISS fans aboard and ready to rock! Each year, in true KISS Army style, various fan-organized pre-kruise parties and reunions are held in the city of departure. This year, nine-time kruisers Joe D’Angelo and Jay Jadofsky are teaming up with fellow kruisers Neil Davis and Bill Alward to present “KRUISE FEST” a two-day music festival and Rock-n-Roll Expo at the DoubleTree Hilton Convention Center in Miami, FL.

The event takes place on Monday, October 28 and Tuesday, October 29 with a line-up of Grammy-winners and rock standouts. Opening the Monday show are fan favorites Jaded Past and KISS Kruise alumni The No. 13’s. They are followed by an amazing performance by the Kruise Fest All-Star Band. Anchored by Ace Frehley‘s touring band, the group will be joined by Grammy-winners John Regan and Bob Kulick, and artists including Richie Scarlet and Tod Howarth, with more to be announced. Closing out the night will be Sebastian Bach performing a full set consisting of the first Skid Row album in its entirety!

Tuesday will feature a non-make-up acoustic set by KISSTERIOUS, a tribute band from The Netherlands, followed by front man extraordinaire John Corabi (Motley Crüe, Ratt, The Dead Daisies) performing poolside in what is sure to be a highlight of this two-day event. Hosting the pool party will be Steve Mitchell, “ChippenPaul Stanley” of the Las Vegas tribute, SinCity KISS. The evening set begins with KISS America (Florida’s ultimate KISS tribute band!), followed by international recording act Thunder Mother from Sweden, and Return of the Comet (featuring members of Frehley’s Comet.) Tuesday’s headliner will be none other than the Spaceman himself, Ace Frehley! Ace will be performing a full set with his band AND will jam two songs with Return of the Comet for a once in a lifetime experience for those in attendance.

Throughout both days, between-set tunes will be provided by Miami’s own KISS Kruise alum DJ Noiz, entertaining the crowd with favorite rock songs and mixes. Also on-site will be an International KISS Exchange and Rock-n-Roll Expo featuring vendors selling KISS and rock memorabilia. Special Expo guests in attendance Tuesday will be Jake J and the Killjoys, former KISS 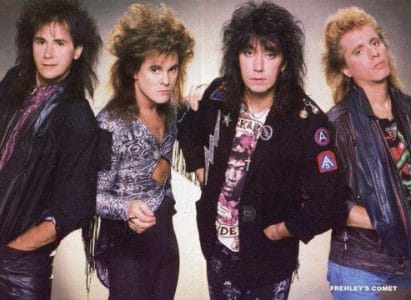 security Big John Harte, KISS and Dio album designer Ken Kelly, and several KISS podcast representatives. Fans will have the chance to meet and interact with all special guests!

General Admission tickets are only $85 and admit you to all the shows in the concert hall on BOTH days! For tickets and hotel and event details go to www.kruisefest.com.”

Back in May 2018, Frehley, Regan, Howarth and drummer Anton Fig did a mini-Frehley’s Comet reunion when the foursome played a couple songs together at the Indianapolis KISS Expo in Indianapolis, Indiana, USA. In an interview with Sleaze Roxx back in March 2019, Regan commented as follows about the mini-reunion: “It was wonderful. I just wish that Ace would have taken 15 minutes. We could have gotten over the songs first.”

Regan continued: “You know, it wasn’t perfection but the spirit was there. I have done a bunch of records outside the Frehley family with Anton and everybody knows that he’s one of the top drummers on the face of the earth. So for a bass player, to play with Anton Fig is just a joy. Those of us who have had the opportunity, everybody knows what I am talking about. It was great! Again, I wish that we would have a little time to rehearse but it was kind of like getting back on a bicycle. Riding at first is a little wobbly but it’s still fun. It was great! Again, when we do this KISS Kruise IX Pre-Party, I have already told everybody we’re going to put in about half an hour of rehearsals so we’re all on the same page.”