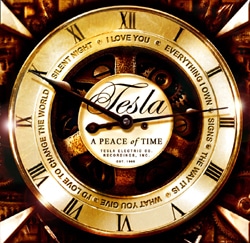 A HOLIDAY GREETING FROM TESLA “A PEACE OF TIME”:

A PEACE OF TIME 7 song taste of music that was recorded live in the studio and features recordings of TESLA’s own songs in a different fashion as well as a few covers that we love. Set to be released for the Holiday season, there is a recording of the Christmas classic “Silent night” and alternate recordings of TESLA classics.

I LOVE YOU (Climax Blues Band)
This track was the first song that Tesla recorded in the studio together when reuniting in 2000 after the 5 year break-up. JK asked the band to record this song to be played at his wedding.

EVERYTHING I OWN (Bread)
Another beautiful love song, this song really showcases JK’s vocal ability and TESLA’S ability to “own” a classic cover. Transposed using a capo and teslafied during the guitar solo, this track captures TESLA chemistry.

SIGNS
This is a very raunchy version of our top 10 hit recorded “live” in the studio with a little more grit and attitude than the 5 man “acoustic” version.

THE WAY IT IS
We recorded this version in the studio after coming home from the Canadian “acoustic” tour. It is a stripped down version and we opted to sing it a bit lower to make it more soulful and played the guitar parts with a softer touch.

WHAT YOU GIVE
Not much to say about this track except it is one of our favorite songs we’ve written and our fans seem to love it as much if not more today than ever. This recording is a Hybrid version of acoustic and electric complete with the guitar solo being played acoustically and the twangy country licks complementing JK’s soulful lyrics.

I’D LOVE TO CHANGE THE WORLD (Ten Years After)
A Great song! This track was originally considered for the “REAL TO REEL” set list but somehow got left behind. This is a “live” demo version recorded in the studio and we wanted to convey a fierce “Guitar” battle between Frank and Tommy. There is a lot of aggression in the music and JK put some serious vibes in the vocals.

SILENT NIGHT (ACOUSTIC SOLO)
This recording is an acoustic arrangement put together by Frank Hannon as a bonus track for the EP’s release in December for Christmas. The melody is beautiful and is reminiscent of TESLA’s “LOVE SONG” intro with classical guitar lines and finger picking. To add to the arrangement, there are Dobro slide parts and a Mandolin outro added to enhance the holiday spirit. Enjoy!