A La Carte may well be establishing the record of the longest time passed between a band forming and released its debut album. More than 40 years after first forming, A La Carte have released their debut album entitled A La Carte – Est. 1976. 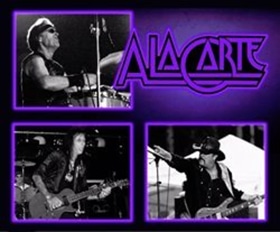 The release of “A La Carte – Est. 1976” is the first-and-only album from the Southern California power trio that ceased performing in 1984. After four decades, hopefully it was worth the wait.

Barely out of their teens, guitarist K.K. Martin, bassist Craig Miller and drummer Brian O’Brian had years of performance experience in previous bands prior to launching A La Carte on October 12th 1976. An auspicious, boisterous kickoff, the band played to a drunken mob of 2000 at an annual Seal Beach block party which resulted in the ban (to this day) of unlicensed amplified live music. The commotion was observed by a few savvy rock promoters who saw the band’s potential to fill up their hall parties. By December 1976, A La Carte was playing the 2,000 capacity Queen Mary, the 1,500 capacity Lafayette (Fender’s) Ballroom and soon thereafter the 1,500 capacity Edgewater, increasingly sporting more amps, bigger road crews and ever-gaudier custom-made stage attire. Between gigs the band did what all 70’s bands did: rehearse in the afternoon, write songs in the evening, and party all night long like they would never die.

Adding to the band’s buzz was their friendship and mutual respect with The Runaways, the world’s first internationally famous all female rock group. The bands played gigs, traded licks and hung out together. The Runaways had become a major headliner and A La Carte could deliver a crowd that would help pack the shows.

After having gigged with all the more prominent local talent (Smile, Snow, Wolfgang, Stormer, Eulogy, Max Havoc and many others), A La Carte set their sights on playing with the longest-standing local band, Van Halen, and were offered a slot just nine months after their October ’76 coming-out. The results were hilarious……more about that someday. 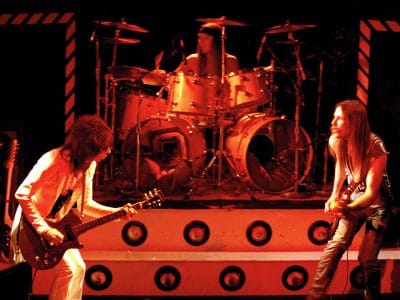 By this time, A La Carte had firmly established their own sound. Guitarist K.K. Martin described it as “ZZ Top meets The Who and talks about the J. Geils Band“. With two distinct lead singers, spot-on harmonies, a dynamic, peerless bass player, an accomplished show-drummer with barely any clothes and too much makeup, and a searing, slashing blues-infused lead guitarist, A La Carte easily stood apart from the crowded field. Writing and performing songs that were alternately heavy thunder and ferocious boogie, the band enhanced their live appearances with outrageous humor and outlandish showmanship. The crowds seemed pleased.

Randy Rhoads-era Quiet Riot, a band who had opened for A La Carte on several occasions in Long Beach and Orange County, called to invite A La Carte to play a weekend with them at the Starwood. So began A La Carte‘s two-year residency at arguably the best-ever venue in Hollywood, sidestepping occasionally to play the Whisky a-Go-Go and the Troubadour. With an unlimited guest list and a bottomless bar tab, A La Carte and all of their best friends and fans were living the dream.

When the Starwood was forced to close in 1981, A La Carte went back to playing their favorite Orange County venues: the Golden Bear, Radio City, and the Woodstock. Life was good and the gigs were still hot but time took its toll and the band parted as friends in 1984.

Featured in Bob Nalbandian‘s 2015 rockumentary “Inside Metal: Pioneers of L.A. Hard Rock and Metal“, A La Carte clearly left its mark on the Southern California musical landscape. Although many scratchy recordings and half-melted cassette tapes of the band are still floating around, A La Carte never took the opportunity to release an album of their material. The new disc is a reflection of good times past: very new recordings of very old songs, 80% of which were written between 1976 and 1979. The record is a no frills representation of the way A La Carte sounded during that wonderful era, designed to please old friends, and hopefully make a few new ones.”

You can purchase A La Carte‘s debut album directly from the band’s website.

No Tell Motel A La Carte