A look back at Iron Maiden’s Ed Force One

Iron Maiden posted a YouTube video (see below) yesterday entitled Ed Force One Special that takes a fun look back at their Ed Force One 747 airplane which took them around the world for their The Book of Souls World Tour in 2016. 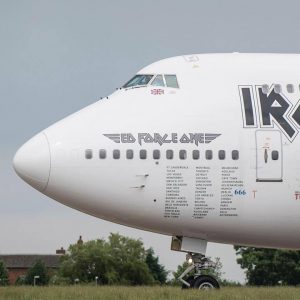 What makes Ed Force One that much more special is that Iron Maiden‘s own lead vocalist Bruce Dickinson was the airplane’s pilot for the tour just like he has been for previous tours.

Some of the statistics offered in the video are amazing including: 5 months; 6 countries; 45 cities; 123,000 kilometres flown; and the longest flight running at 11 hours and 24 minutes.

Part of the flight crew was interviewed for the video with flight attendant “Gully” stating in part: “Bruce is a very professional guy as a pilot. And he is one of the ideal pilots that you would want to be flying with because he’s a very crew oriented guy, humble and modest, and an amazing guy to be around with to say the least again. This is my big family here. I love them to bits. I don’t think that it would be as special as it is if it wasn’t for these guys here so again, I am very honoured to be around these guys.” 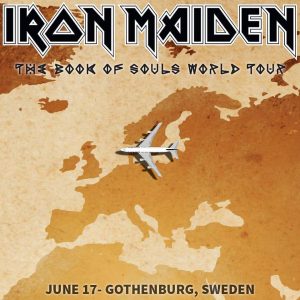 Sleaze Roxx had the opportunity to attend one of Iron Maiden‘s tour stops in Canada in 2016 and stated the following in its concert review of the Toronto show: “Iron Maiden closed off their strong set with their sing along classic “Wasted Years” from 1986’s Somewhere In Time, which was voted as the Iron Maiden album that has stayed the most with Sleaze Roxx readers over the years (along with Live After Death). Overall, Iron Maiden put on a fantastic performance and I really respect that they are able to play so many new songs from their latest album yet continue to grow their audience and certainly a lot more than back in 2000. While many heavy metal bands continue to rest on their laurels from their ’80s past, Iron Maiden are one of the few that continue to make relevant music that they are not afraid to play more than 35 years after first forming. It was therefore no surprise when Dickinson advised that The Book Of Souls had reached gold status in Canada and was “this close” to being certified platinum. I truly hope that Iron Maiden have at least one more studio album in them and will release a live album based on their The Book Of Souls tour. Up the irons!”

As the 2016 tour draws to a close, we look back at the fun we had with Ed Force One.Models and merch available at IronMaiden.comComplete your Iron Maiden vin…