All That Shreds has posted an article from Curt Dudley about the Flyers Wars on the Sunset Strip during the 1980s. Dudley previously wrote an insightful article about the last two years of ex-Ratt guitarist Robbin Crosby‘s life.

The following are excerpts from Dudley‘s article on All That Shreds: 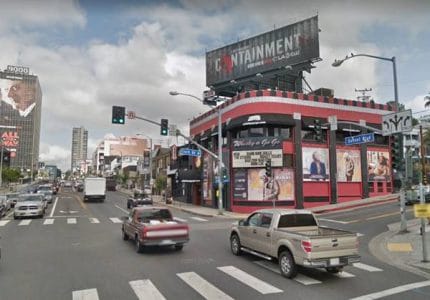 “Now, keeping in mind there were literally HUNDREDS of bands at any given time all vying to get a coveted ‘shot at a slot’ on these stages. You can guess what usually happened…and you would be right! Fierce competition at best and free for all brawls at worst. Back then, there were no cellphones or computers of any kind and even if you had a computer…. there was no internet. Al Gore had not yet invented it !! (yes, that is a joke!)

So the dilemma was just how to get the word out…it had to be done, no alternative because not only did the bands battle each other for a slot on a bill….we were still competing to draw people and get them to YOUR show/venue and not one of the other venues bills. It was pretty crazy because there were FIVE venues all within one square mile!!

Sometime in 1984 ‘The Flyer Wars’ started. Now, you had all of these bands doing whatever it took to increase their fan base and hopefully create a buzz about the band….it was brutal, a wild race to beat out the other bands and get the word out faster and more efficiently than the next guys. Some bands were very adept at this game…Warrant and Poison come to mind.

Bottom line was, you HAD to get stage time and then the patrons could decide whether your band was worthy of attention. You were fortunate if your band had management and were able to advertise shows in the local rags. ‘BAM Magazine’ is one that comes to mind. We had ‘management’ that wasn’t up to the task, but we didn’t know any better. To us, management was just an unpleasant necessity we had to put up with, no fun to be had there. In our minds, all they did was get in the way of our skirt chasing….and phooey on that!

At that time, there were wooden telephone poles. These were prime places to advertise because it was free, although illegal and there were enough of them to go around in theory. If we weren’t playing on a Friday or Saturday night, you would find us on the strip passing out Flyers, talking to anyone who would listen to our bullshit, shaking hands, kissing babies (not really!) and always on the lookout for ‘pole space’…stapling as many flyers as we could in the shortest possible amount of time. We didn’t want to waste ALL of our time replacing flyers….we had other fish to fry. The women!

At first, it all worked well and all the bands were mindful not to step on each others toes…. that did not last long! Then it started. Bands would go from pole to pole ripping down other bands flyers and putting up their own. It didn’t take long before we started to work out our own way of tackling the problem, but it was always an uphill battle and our flyers got shredded just like ‘theirs’ did. It was not uncommon to walk by the same pole 5 times in an evening and see a different flyer each time, It got that stupid.

Another ‘tactic’ was to get as many flyers as possible from the ones passing them out….and as soon as possible …..FIRE them into the nearest trash can !! This went on and on and you really had to focus on the task at hand. Getting stage time and experience by any means short of murder.”

You can read the rest of Dudley‘s article at All That Shreds‘ website.