Melbourne, Australia based rockers Ablaze consisting of lead vocalist Danny Slaviero, lead guitarist Ben Anderson, rhythm guitarist Matt Dynon, drummer Dan ‘Mango’ Mangano and bassist Dave Knight have released a video for their song “Where’s My Drink?” from their latest album No Chaser just before they head off to Europe for their No Chaser European Tour starting on November 6, 2019. 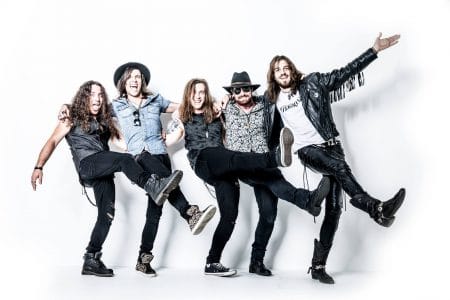 Sleaze Roxx stated the following in its review of No Chaser including the song “Where’s My Drink?”:

“The final three songs, “Where’s My Drink?”, “Bottom Of My Bottle” and “Bar Fight Blues” — I like to refer to as a somewhat trilogy — The Bar Room trilogy. Before I had actually heard the songs, I was instantly drawn to the song titles and imagined that they flowed into each other as one big storyline. It’s not really the case, but I thought that would have been a cool idea. The music for “Where’s My Drink?” aptly suits the song with its Irish inspired intro that also substitutes as the rhythm for the chorus. It’s a fun little romp obviously about having a big night on the drink with a clear reference to Guinness in the lyrics.

No Chaser is a fantastic debut album from Ablaze. It displays a musical maturity which really should be beyond the band at this point in time — something usually reserved for bands with many years experience under their belts. The riffs and general guitar work are superb and the variety of song styles and structures make No Chaser a very enjoyable listen.”