AC/DC lead guitarist Angus Young recalls bandmate Bon Scott telling him, “Whatever I do, you don’t”

AC/DC founder and lead guitarist Angus Young was recently interviewed by Paul Elliott for Guitar World. The interview covers a range of subjects including a little bit of former frontman Bon Scott‘s time in the band. Scott joined the band in 1974 and sadly died while sleeping in a car after a night of drinking in February 1980. 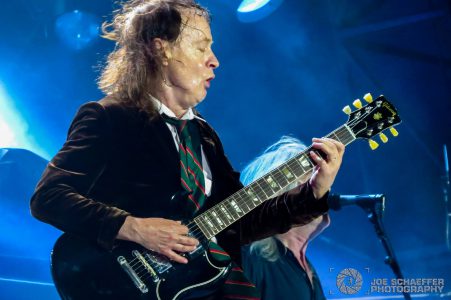 Scott was more experienced and older than his AC/DC bandmates and had a taste for the rock ’n’ roll lifestyle. In terms of what Young made of Scott back then, the guitarist indicated: “Bon joined us pretty late in his life, but that guy had more youth in him than people half his age. That was how he thought, and I learned from him. Bon used to say to me, ‘Whatever I do, you don’t.’

Oh, I had a few wild nights over the years, but most of the time everyone else was having them for me. Because of the schoolboy uniform, some women have tried to mother me – they think I’m cute because I’m so short. But playing has always been the thing for me.

I never really looked beyond the next gig. In the early days, all my mates used to say to me, ‘You must be meeting loads of girls…’ Well yeah, I used to meet plenty of girls, but none of them used to want to go home with me.

Some women would come up and make, er, bold statements, but I don’t know why. There’s nothing sexy about a schoolboy, is there?”

In terms of Scott‘s witty lyrics, Young stated: “Bon called himself a ‘toilet wall graffitist’. He was full of compliments about himself! But he could conjure a story from anything.

She’s Got Balls was about his first wife. And he did say he wrote Problem Child for me, but you now, I never owned a knife like it says in the song. My dad took my knife off me when I was four. Just having a guitar was bad enough, I suppose. But yeah, Bon summed me up in two words!”

You can read the rest of the interview with Angus Young at Guitar World‘s website.