Will AC/DC release a studio album with Axl Rose on lead vocals? It seems that such a possibility may become reality as there have been sightings of various past and current AC/DC band members in Vancouver, British Columbia, Canada in the last day or so where the famous Aussie band has recorded its last three studio albums. In addition, Axl Rose appears to have some availability in the next few months as Guns N’ Roses are not scheduled to play their next concert until November 3, 2018 at the Parque Fundidora in Monterrey, Mexico. 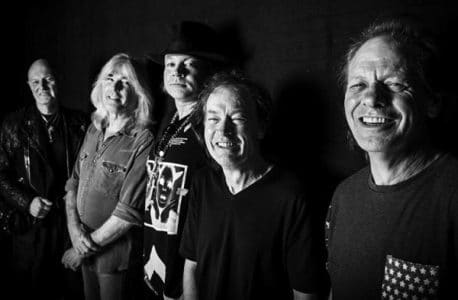 An article from Steve Newton for The Georgia Straight released today discusses what one of his sources has told him and states (without the various links in the article):

“The guy tells me that he had a quick chat with a couple of members of AC/DC in downtown Vancouver this morning. One of the rockers that he talked to was Stevie Young, Angus Young‘s nephew, who took over the rhythm-guitar spot in AC/DC from Angus‘s brother Malcolm in 2014 when Mal started suffering from the health problems, including dementia, that he would succumb to last November.

I’d like to announce that the other rocker my source chatted with briefly today was Axl Rose, the Guns N’ Roses frontman who took over the lead-vocals position from Brian Johnson on AC/DC‘s last tour when Johnson started suffering hearing problems.

I can’t announce that, though, because the other rocker my source talked to was none other than, get this: Phil Rudd! Yes, Phil Rudd, the longtime AC/DC drummer who was himself replaced behind the kit by Chris “Thunderstruck” Slade in 2015 for the band’s Rock or Bust World Tour. (In 2014 Rudd had been charged with various crimes, including “attempting to procure a murder”, although that charge was quickly dropped.)

Maybe it’s just a coincidence that Rudd and the younger Young were spotted today in the city where AC/DC recorded its last three albums. Maybe they just travelled over from Australia for a little vacay or something.”

You can read the rest of the article at The Georgia Straight.