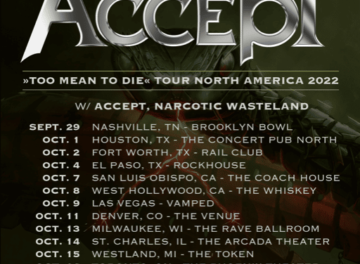 The following message was posted in part on Accept’s Facebook page earlier today (with slight edits): 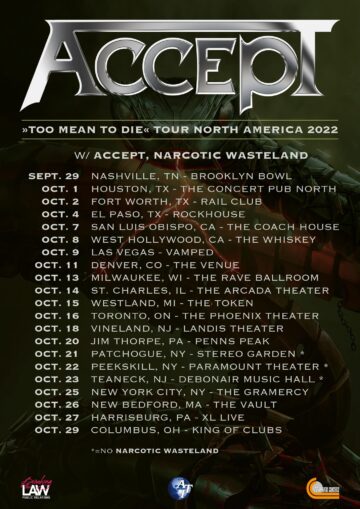 Last year, Accept released their critically acclaimed 16th studio album, Too Mean To Die, which landed them on the top of the charts [#1 – USA Hard Music, #2 – Germany, #3 – UK (Rock), etc.]. The band, which includes guitarist and founding member Wolf Hoffmann, has defined the international genre since they formed in Solingen, Germany in 1976, reigning as one of the most important German rock bands in the 80s alongside the Scorpions, while also influencing bands such as Metallica, Slayer, Guns N’ Roses and Iron Maiden. Now, the metal legends are coming back to the states, poised to kick off their headlining “Too Mean To Die – Tour #NorthAmerica 2022” this fall, featuring Narcotic Wasteland as openers.

Accept guitarist Wolf Hoffmann comments: “After two difficult years, I am very much looking forward to returning to the USA and playing in front of our American friends again. Let’s rock out and have a great Accept metal party with all of you headbanging metal veterans out there!”

Fans can expect a diverse set-list of new and classic tracks, plus mega-hits “Balls To The Wall”, “Princess Of The Dawn”, “Fast As A Shark” and many more. See below for all dates. VIP experiences will be available – stay tuned for more information coming soon! 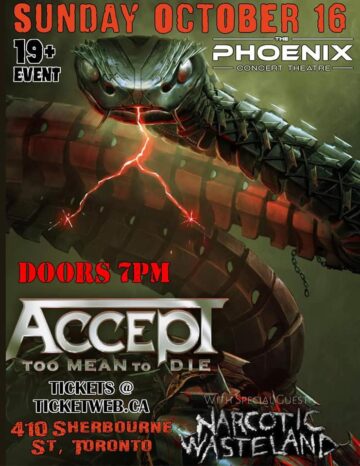 When Accept first launched at the end of the 70s, the metal genre didn’t even exist. At first, the band could only be labelled with the (quality) seal “crazy loud and crazy wild”. Today, fans know that this was (and is) metal par excellence. Accept also opened the door to thrash metal, inspiring giants such as Metallica. Guitarist Kirk Hammett even recently stated in the German magazine Gitarre & Bass: “Wolf Hoffmann has a huge influence on me.”

A worldwide music phenomenon for more than 40 years, Accept still impress with razor-sharp guitar licks and a steel-hard sound. Countless world tours and headline slots at the biggest, cutting-edge festivals cemented the band’s reputation as one of the best, hottest and most proficient live acts ever. In addition, they’ve sold millions of records and achieved gold status in the USA.

Now, with Too Mean To Die – which was mixed by long-time Accept producer Andy Sneap (Judas Priest, Megadeth) – the band is sounding better than ever, with new additions Martin Motnik (bass) and Philip Shouse (guitar) strengthening the line-up even further, forming an unbeatable team. Firing on all cylinders, this is Accept turned up to eleven!”