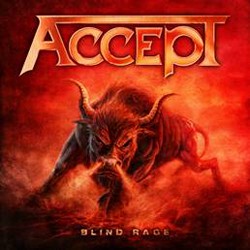 In the history of heavy metal not many bands can claim to be able to celebrate their breakthrough twice. Accept managed this four years ago with their reunion record ‘Blood Of The Nations’ — returning with a vengeance! Now Accept open the next chapter in their book of heavy metal, with the upcoming studio record ‘Blind Rage’ — which will be out on August 15th.

‘Blind Rage’, just like its two predecessors with new vocalist Mark Tornillo, has been produced, mixed and mastered by Andy Sneap. “The cover artwork done by Daniel Goldsworthy shows the beast coming over us — in blind rage — all over the planet. Wherever we go, whenever you turn on the TV, there is blind rage in the works — either natural catastrophes or man-made madness,” continued Hoffmann.

There will also be a limited edition digipak version of ‘Blind Rage’ that includes either a bonus DVD or BluRay disc and features a complete Accept live show recorded in Chile 2013 during the ‘Stalingrad’ tour. Upfront will be the single release of the opening track “Stampede”, which will be out on July 11th digitally and on a limited vinyl edition. The band also did a video clip for “Stampede”, which will be ready by the end of June.

Hardly any other band has influenced the heavy metal genre as much as German legends Accept. Classics albums such as ‘Restless And Wild’ (1982), ‘Balls To The Wall’ (1983) and ‘Metal Heart’ (1985), have inspired generations of new bands, and this has continued since their reunion in 2009. Both ‘Blood Of The Nations’ (2010) and ‘Stalingrad’ (2012) entered the charts globally and were voted among the best albums of their respective years by Sleaze Roxx readers, and underline the premiere league status Accept still have today.