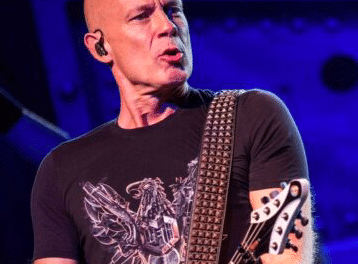 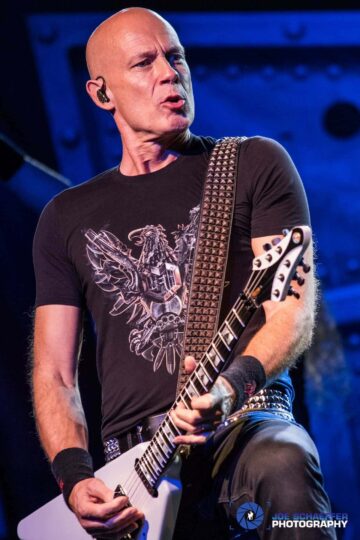 Rushworth noted to Hoffmann that Accept‘s third studio album Breaker (1981) landed them a slot opening for Judas Priest on the latter’s World Wide Blitz Tour. Hoffmann commented: “Oh my God, that was a huge stepping-stone for us! That was the first professional tour that we’d ever been on. Like a lot of bands all we’d done up until that point was fiddle around in our own back yard and do a few local shows. We’d never toured properly before Priest took us on the road — we’d only played single gigs here and there. The most we’d done in a row was a couple of shows back-to-back at a weekend! We’d certainly never been away from home for three or four weeks and never been to the UK before. Here we were playing live with Priest and travelling on night liners! We were huge fans of the band and it was an incredible experience. We had no idea how things were done in the real world or how to present ourselves on stage or off stage. We learnt a lot of things on that tour that helped to shape our career.”

On whether he ever imagined Judas Priest and Accept being relevant and popular 40 years later, Hoffmann indicated: “If you’d have told me on that tour that people would still be listening to metal bands in 2021 I’d have laughed at you. Just the idea that you could spend your whole life in a band seemed so outlandish at the time. Back in 1981, nobody had actually done that. The bands from the 60s and 70s weren’t old enough to have been through their entire lives in music. There was no template or reference point for whether bands could last forever. And if I’d presented being in a band as a long-term career option to my parents they would have rolled their eyes in disbelief. They were happy enough for me to be in a band but they always asked me what I was going to do when I was 30 and when I was going to get a real job. That was definitely the attitude in Germany in the 70s. A career as a rock star really wasn’t an option. I think it was different in the UK. Britain and London ruled the world when it came to music back then and maybe musicians (and their parents) were thinking differently over there. But in Germany? It was like wake up and get real. Nobody had proved you could be a professional musician for 40 years at that point and I don’t think anyone back home believed that would ever be an option.”

In terms of why metal has endured over the years, Hoffmann opined: “That’s the strange thing. Back in the 70s, listening to heavy music was a rebellious thing. It was for young people who wanted to be different. Nobody over the age of 25 would listen to a band like Judas Priest. My parents always said ‘turn that noise down’ and they simply couldn’t understand any of it. And of course that made it even cooler and edgier for the kids. We wanted to make music that our parents hated and the whole goal was to shock. Now that sense of rebellion has disappeared. Entire families head to metal shows and nobody raises an eyebrow. Grandparents are turning up with the grandchildren to watch bands like Maiden! Heavy metal has become totally mainstream.”

You can read the rest of the interview with Wolf Hoffmann at Rushonrock‘s website.