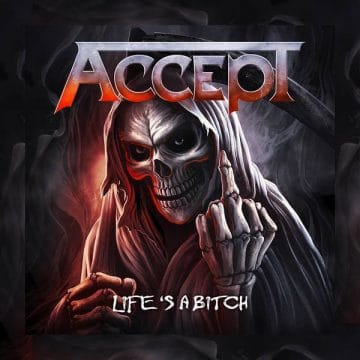 German heavy metal rockers Accept have released a new single titled “Life’s A Bitch” which coincides with the start of their Symphonic Terror Tour tomorrow (on April 20, 2019) at the Stadthalle Wuppertal in Wuppertal, Germany.

The following message was posted on Accept‘s Facebook page on March 1, 2019:

“ACCEPT is about to bring their “Symphonic Terror Tour” to select European stages, kicking off on April 20 in Wuppertal, Germany. To celebrate, the band will release a special 7″ vinyl single, featuring a brand NEW studio track titled “Life’s A Bitch” as well as ‘Restless And Wild (Live at Wacken 2017)’ on the B-side, on April 19. Pre-order now: http://nblast.de/AcceptLifesABitch

Guitarist Wolf Hoffmann comments, “We love the title of the single…WHO does not agree to THAT: ‘LIFE’S A BITCH’? It is universal, even if the stories are different. EVERYBODY KNOWS WHAT THAT MEANS!””