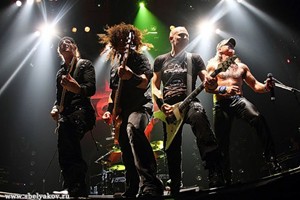 Accept To Begin Work On ‘Blood Of The Nations’ Follow-Up

Following the tremendous success of the current Accept album ‘Blood Of the Nations’, as well as an extensive world tour with more than 180 shows around the globe, Accept have now withdrawn from the stage to start work on their next album.

The band, consisting of Wolf Hoffmann (Guitar), Peter Baltes (Bass), Herman Frank (Guitar), Stefan Schwarzmann (Drums) and singer Mark Tornillo who made his debut on ‘Blood Of The Nations’, are currently writing new songs to the follow-up for the critically acclaimed ‘Blood Of the Nations’. The new album is scheduled to be finished and released in the spring of 2012 and will once again be produced by Andy Sneap.

Guitarist Wolf Hoffman is quick to comment, “Accept and Andy Sneap have the perfect synergy. This was so clear with ‘Blood Of The Nations’ and we are excited to continue on that path. Andy is not only an amazing and prolific producer but also a very good friend who has long become a member of the Accept family.”

‘Blood Of The Nations’ reached 187 on the Billboard charts while placing on the 2010 Sleaze Roxx Reader’s Choice Top 20.