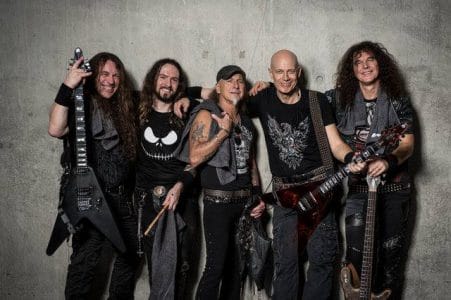 The following was posted in part on Accept‘s Facebook page yesterday:

“The new ACCEPT album (and a special Wacken Open Air show) is coming!

The new record is entitled »The Rise Of Chaos« and will be unleashed on August 4th, 2017. The 4th studio release through Nuclear Blast will continue the tradition of its three predecessors – »Blood Of The Nations«, »Stalingrad«, and »Blind Rage« – with grandeur and precision.

And if this wasn’t enough, we will celebrate the album’s live premiere exclusively on August 3rd, on the day before its release, as a part of a special show at Wacken Open Air, Germany. The set will consist of three parts:

Part 1 will bring fans a classic set, packed with new and old hits.

Part 2 will present another premiere: Wolf Hoffmann will be playing tracks from his solo album »Headbangers Symphony«, released in 2016, with the Czech National Symphony Orchestra for the very first time. On this record, Wolf has covered famous opuses by composers such as Beethoven, Vivaldi, and Mozart, in a metal guise.

And in Part 3, all elements can be seen and heard together: This will make the holy Wacken ground shake by sharing the stage with the orchestra, supported by a complex multimedia show.

This unique concert experience will take place on this year’s »Night To Remember« which makes it even more special. The »Night To Remember« is a celebrated, long-lasting Wacken tradition; for one night of the festival a selection of established bands will do something unique and special with their performance.”

Sleaze Roxx stated the following in its review of Accept’s last studio album Blind Rage: “Blind Rage follows off where Blood Of Nations and Stalingrad left off — if anything, Accept have kept the same formula more or less in terms of writing and song structure and did not try to re-invent the wheel. Why should they when the band is producing some of the best music of their long and storied history?”