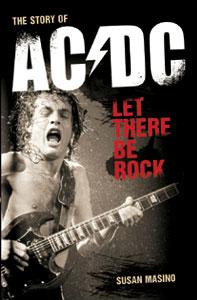 Susan Masino’s excellent read ‘Let There Be Rock – The Story of AC/DC’, has been given a makeover to bring the story up to date with the current album.

The book, originally released in 2006, has a new chapter to tell in the world of AC/DC, the current ‘Black Ice’ period.

Susan’s AC/DC book is the most in-depth account of the band, as told by the people around them.

‘Let There Be Rock – The Story of AC/DC’ has been printed in seven languages.