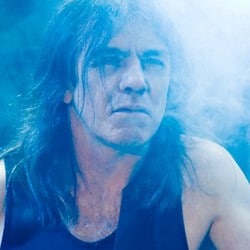 Rumors circulating earlier this week that AC/DC were about to retire have proved to be false. Although guitarist Malcolm Young is stepping away from the band, singer Brian Johnson ays the remaining members will get together this May to work on new material.

To put an end to the rumors of AC/DC’s demise, the band release a statement saying, “After forty years of life dedicated to AC/DC, guitarist and founding member Malcolm Young is taking a break from the band due to ill health. Malcolm would like to thank the group’s diehard legions of fans worldwide for their never-ending love and support. In light of this news, AC/DC asks that Malcolm and his family’s privacy be respected during this time. The band will continue to make music.”

“We are definitely getting together in May in Vancouver,” Johnson told the Telegraph. “We’re going to pick up some guitars, have a plonk, and see if anybody has got any tunes or ideas. If anything happens, we’ll record it.”

“I wouldn’t like to say anything either way about the future,” Johnson continued. “I’m not ruling anything out. One of the boys has a debilitating illness, but I don’t want to say too much about it. He is very proud and private, a wonderful chap. We’ve been pals for 35 years and I look up to him very much.”

It has been reported that AC/DC are planning a tour to mark their 40th anniversary, which would involve 40 concerts in 40 different venues. “That would be a wonderful way to say bye bye,” said Johnson. “We would love to do it. But it’s all up in the air at the moment. AC/DC is such a tight family. We’ve stuck to our guns through the ’80s and ’90s when people were saying we should change our clothes and our style. But we didn’t and people got it that we are the real deal.”

According to The Orstrahyun, more than a month ago Malcolm Young suffered a stroke which left a blood clot on his brain. When AC/DC reunited at the start of April to begin a month of rehearsals, in the lead-up to new album recording sessions, Malcolm discovered he couldn’t play. At least, he couldn’t play like he used to play.

Malcolm previously left the band for a short peroid in 1988 to deal with alcholism. He was replaced on select dates of the ‘Blow Up Your Video’ tour by nephew Stevie Young of the Starfighters.