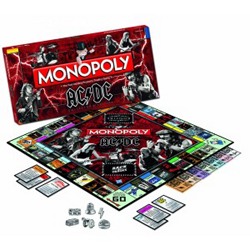 AC/DC Monopoly Board Game Is Now Available For Purchase

There’s Gonna Be Some Rockin’ when you experience one of the world’s best-selling bands teaming up with the world’s most popular board game bringing you the ultimate AC/DC experience.

The AC/DC Collector’s Edition of MONOPOLY celebrates The Rock N Roll Dream with some of the greatest rock music of the 20th century and beyond. This completely customized game features the band’s most popular albums and locations including Black Ice, Stiff Upper Lip, AC/DC Lane and more, allowing fans to build their own AC/DC empire.

We’ve also put together an exclusive AC/DC Monopoly/Live At River Plate Bundle (DVD or Blu-ray) with commemorative t-shirt. Each order will also include a limited edition 2×3′ poster, available exclusively to fans who order through ACDC.com. Poster supplies are limited, order now and reserve yours!

AC/DC Live At River Plate is the definitive live concert DVD documenting AC/DC’s massive Black Ice World Tour. Shot with 32 cameras entirely in HD in December of 2009, AC/DC Live At River Plate marks AC/DC’s triumphant return to Buenos Aires where nearly 200,000 fans, and 3 sold-out shows, welcomed the band back after a 13 year absence from Argentina. This stunning live footage of AC/DC underscores what Argentina’s Pagina 12 newspaper reported by saying “no one is on the same level when it comes to pure and clear Rock ‘n Roll.”