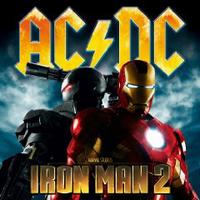 AC/DC has just announced AC/DC: Iron Man 2, the official album set to be released April 19th through Columbia Records in support of the upcoming Iron Man 2 film from Marvel Studios. The album will feature 15 classic AC/DC songs, selected from ten of the band’s studio albums, ranging from 1976 to 2008. Included in the album are notable classics such as “Shoot To Thrill”, “Thunderstruck”, “Let There Be Rock” and “War Machine”, from the recent Black Ice release.

Pre-orders begin today, January 26th, at Amazon.com for both the CD/DVD and 2LP version of AC/DC: Iron Man 2, and at Walmart.com for the AC/DC: Iron Man 2 CD. The film opens internationally beginning on April 28, 2010. In the U.S., the film will be distributed by Paramount Pictures and is scheduled for release on May 7, 2010.

New Tour Announcements:
AC/DC has recently announced their participation as a headlining act for the first night of the Download Festival at Donington Park, UK on June 11th. Tickets are onsale to the public and the Fan Club via a special Fan Club On-Sale beginning at 9AM on January 29th here.