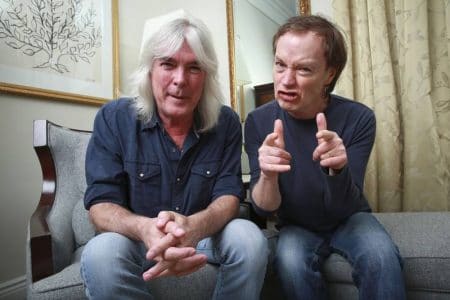 AC/DC guitarist and leader Angus Young was interviewed along with bassist Cliff Williams by Germany’s Ndr.de and asked how new singer Axl Rose was doing.

Young stated to Ndr.de: “He’s doing very well and it’s very good that, you know. I mean under the situation that we had and it was very good that he volunteered and said ‘Hey. If I can help, let me try.’ And so he’s been very good and he had to learn a lot of songs very quickly and he’s done a great job!”

Williams stated with a smile: “He’s done a fabulous job and he’s almost out of his chair now. He’s mobile. He’s enjoyed himself too so it’s been really good!”

Young also pointed out: “His leg is repairing so each show we’ve been doing, he’s been getting up and moving around a lot more so it’s, it adds you know more to the show… We just, you know, we’re committed to finishing this tour. That’s been our main goal and with Axl helping. It’s uh. I know that he is very excited. He keeps saying, ‘Can he do more?’ [laughs] So, but we don’t really know at the end how we will you know. We just want to get you know, this tour which we are committed to doing and we want to finish it.”