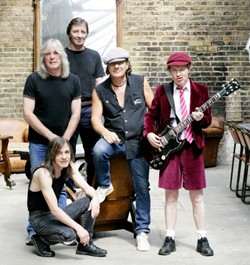 AC/DC guitarist Malcolm Young confirmed to Classic Rock Magazine that the band is working on a potential follow-up to 2008’s ‘Black Ice’, but he warned fans are in for a longer wait than expected, after singer Brian Johnson suggested there would be new material next year.

Young explained: “You know what Brian’s like. He just says things and then walks away. It’ll be a little while — a year or two anyway. I’ve been doing some jamming on some song ideas but I do that all the time, as do the rest of the band. We are still working. But we had a long rest between ‘Stiff Upper Lip’ and ‘Black Ice’, so I think we need a couple of years to recuperate and work on it a bit more.”

He added it’s unlikely any world tour in support of a future release will grow to the scale of the AC/DC ‘Black Ice’ trek, which lasted almost two years and sold nearly five million tickets.

Malcolm’s son Ross pitched in: “It would probably be a bit less, a year or 18 months. That was very long last time.”