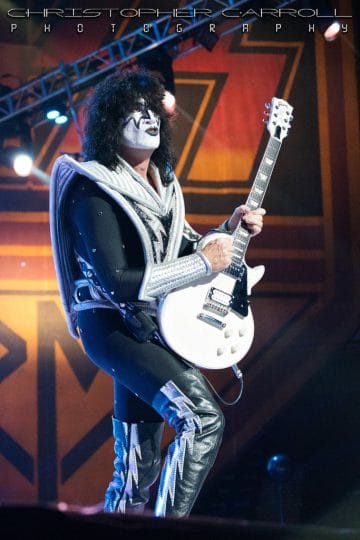 Former KISS guitarist Ace Frehley was recently interviewed by Vintage Rock and spoke about participating in KISS‘ upcoming End Of The Road World Tour while providing some choice words for his current replacement Tommy Thayer.

In terms of his own solo tour possibly conflicting with KISS‘ final tour, Frehley advised: “Getting involved with Kiss on the road would take precedence over what I’m doing with my band. But the only way I would seriously consider it is if I took back my make-up and costume and my character — which I designed. Tommy Thayer is not a bad guitar player, but he basically just mimics everything I wrote, and tries to imitate my persona. He’s been doing it for 15 years. But the reality is I’m the original guy. And nobody can really copy the way I play guitar.”

With respect to participating in the KISS‘ tour without original KISS drummer Peter Criss, Frehley opined: “I think it would be great if Peter was involved. Obviously, at this point in his life, he wouldn’t be able to do a two-hour show. But I can see if we worked out a situation where Peter came out at the end and did three or four songs — sang “Beth,” did “Black Diamond,” and a couple of others, I think that would be fun.”

You can read the rest of the interview with Frehley at Vintage Rock.