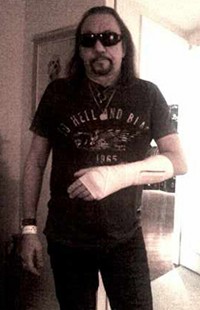 Former KISS guitarist Ace Frehley has been forced to cancel his three upcoming UK tour dates due to a fractured left wrist resulting from a fall in his home yesterday.

Doctors applied a fiberglass cast to Frehley’s hand and arm, and he has been instructed not to play guitar or use his wrist for a minimum of ten days. Ace would like to convey his deepest heartfelt apologies to all of his UK fans and to make it up to them, has already signed on to headline Hard Rock Hell 2012 next December. He hopes to be able to announce the additional rescheduled dates soon.

‘No Regrets’ offers a rare behind-the-makeup look at KISS’ legendary origins, including the lightning-bolt logo Ace designed and the outfits his mother sewed. Ace talks about the unspoken division within the band — he and Peter Criss versus Paul Stanley and Gene Simmons — because the other two didn’t ‘party every day’. Ace also reveals the inside story behind his turbulent breakup with KISS, their triumphant reunion a decade later, and his smash solo career. Along the way, he shares wild stories about dancing at Studio 54 with ‘The Bionic Woman’, working as a roadie for Jimi Hendrix, and bar-flying all night with John Belushi. In the end, he comes to terms with his highly publicized descent into alcohol, drugs, and self-destruction — ultimately managing to conquer his demons and come out on top.