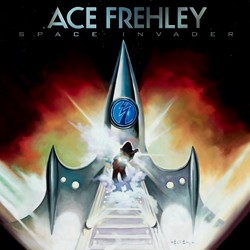 Ace Frehley has tapped long time friend and artist Ken Kelly to create the album cover for his upcoming solo album ‘Space Invader’, due out July 8th through E1 Music.

Kelly, who created the iconic cover art for two of KISS’s best selling LPS, ‘Destroyer’ (1976) and ‘Love Gun’ (1977), says, “It was very exciting when I was approached with the idea of doing an album cover for Ace. I had spoken to Ace on a few occasions about the possibility, so I was delighted when it actually happened.”

Ace Frehley himself comments, “I’ve been talking with Ken Kelly since 2007 about painting a CD cover for me and it has finally happened! I couldn’t be more excited about the new Space Invader cover and the music behind it is also going to rock your world!”

With nearly 35 years between projects, KISS fans will surely be excited about this long-time duo working together again. Kelly concludes, “I am very pleased with the results and proud to play a part of Ace’s continuing successful career!”

‘Space Invader’ will contain at least nine original songs and a cover of the Steve Miller Band’s “The Joker.” Frehley has said that his fans can expect a sound similar to his 1978 solo album, which contained the hit “New York Groove.” Frehley’s previous solo album, ‘Anomaly’, was released in 2009. The record reached #27 on the Billboard charts and was named one of the best albums that year by Sleaze Roxx readers.

“I’m really excited about this record, because everybody that’s heard the tracks just says they think some of the tracks are even better than Anomaly, and even showing another side of me,” Frehley told Rolling Stone earlier this year. “There’s two songs I’m going to re-track, but I’m doing mostly overdubs. Most of the hard work is over.”

Frehley also said that the album would feature collaborations with his girlfriend Rachael Gordon and told Rolling Stone that an album of covers and remakes would follow ‘Space Invader’. “That one will be a real treat for the fans, too,” Frehley said. “I want to get some celebrity guests to play on it, some of the covers and stuff, get Slash, Mike McCready, my buddy from Pearl Jam. You know. The list is endless.” Then, with a laugh, he added, “I might even get Gene Simmons to play bass on a track.”