Former KISS guitarist Ace Frehley was recently interviewed by Australia’s Heavy Mag and spoke about when all four members of KISS — Gene Simmons, Paul Stanley, Peter Criss and himself — released their individual solo albums in 1978 under the KISS name. 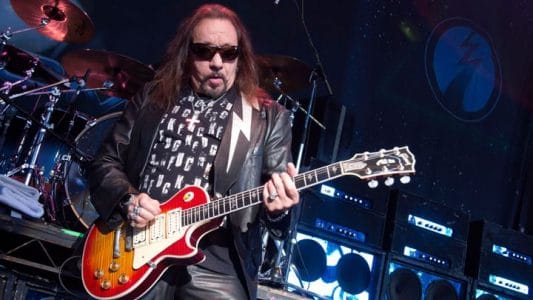 Frehley stated (with slight edits): “I didn’t have a choice… The decision had been made by management and the record label that they wanted four solo albums, one from each of us. I put my best foot forward, and I was lucky enough to get Eddie Kramer – who had worked with KISS on Alive! 1 – to produce, and we had a very good working relationship, and that was instrumental in making a great record. You know as well as I do that my album turned out the best (laughs).”

Frehley also noted that it was easier to come up with new music as his career progressed. The guitarist stated: “I find it easier to write now… Lyrics were always very easy for me as well. If you talk to a lot of musicians, some of them just write the music and they get somebody else to write the lyrics. But I’ve never had a problem writing both. If you look at most of the songs I’ve written, they have been exclusively by myself. I don’t collaborate that often. I remember when I was doing Psycho Circus with KISS in the studio in L.A., and the original lyrics for the song ‘Into the Void’ – which is my only song on Psycho Circus – that song was originally called ‘Shaking Sharp Shooter’ and Paul and Gene looked at me and said they didn’t think the lyrics worked for the song. We had recorded the music, and I said to the guys give me half an hour, and I’d rewrite the whole song. So I went into a room and sat down with a piece of paper and a pencil, and I rewrote the whole lyrical song in thirty minutes, and that became ‘Into the Void’. I don’t know where it comes from sometimes. I feel like the lyrics are being beamed into my head – maybe by aliens – I don’t know (laughs).”

You can read the rest of the interview with Frehley at Heavy Mag.