Big news in the Ace Frehley camp as the guitarist is parting ways with his long-time solo band line-up of Richie Scarlet on guitar, Chris Wyse on bass and Scot Coogan on drums given that he wants to continue working with Gene Simmons‘ solo band members consisting of Philip Shouse on guitar/vocals, Ryan Cook on guitar/vocals, Jeremy Asbrock on guitar/vocals, and Christopher Williams on drums.

Frehley was recently interviewed by The Cassius Morris Show and stated (as indicated by Blabbermouth): “I’m changing the lineup in my band. I’m actually gonna start working with the band that backed up [KISS bassist/vocalist] Gene [Simmons on his recent solo tours]. I worked with them in Australia, and they also did eight shows with me in Japan. And I realized that… I think they were better than my current lineup, so I’ve decided to make a change. They’re younger and more hungry.” 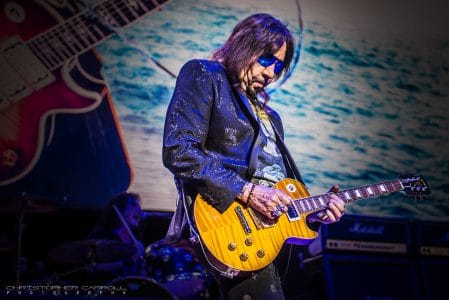 One wonders if Frehley received some push back from his long-time solo band members as the former KISS guitarist put on what can only be described as subpar performances earlier this year with that line-up.

Sleaze Roxx stated as follows in its concert review of Frehley‘s performance at the M3 Rock Festival in Columbia, Maryland, USA on May 5, 2018: “As much as Sebastian Bach was incredibly good, unfortunately Ace Frehley was incredibly disappointing. Being a massive KISS fan, Bach had “warmed up” the crowd by announcing that the Spaceman was coming up next. It was Frehley‘s first time performing at the M3 Rock Festival so having the former KISS guitarist grace the M3 stage should have been one of the special moments of this year’s festival. After all, there were only two bands playing for the first time at M3 this year — Frehley and Last In Line — and the latter had put on an electrifying set. One thing that I knew going into Frehley‘s set is that he’s not really a frontman. It was only by the time that KISS released their sixth studio album Love Gun that the guitarist handled the lead vocals on a song and although Frehley has been mostly a solo performer since 1983 or so, he just never — in my eyes — became the frontman that he needed to be compared to let’s say Dave Grohl of the Foo Fighters (and ex-Nirvana drummer). That being said, seeing the “reluctant” frontman Ace Frehley is always special because he is the original former KISS guitarist and the songs that he has to choose from for his live set are outstanding.

Frehley and his very capable backing band of guitarist Richie Scarlet, bassist Chris Wyse and drummer Scot Coogan kicked their set off with “Parasite” and “Rip It Out.” The performance seemed a little flat despite the great songs being played. Coogan then handled lead vocals on “Love Gun” and did a good job in that regard. In fact, every band member got a shot at handling lead vocals as Wyse took the lead for “Strange Ways” while Scarlet handled the lead vocals for “2 Young 2 Die.” Frehley did address the audience but it was mostly his usual song introductions such as what was the first song that he ever sang lead on (“Shock Me”) or the next one is a “drinking” song (“Cold Gin”). At one point, Frehley introduced his latest single “Bronx Boy” but very oddly, the guitarist and his band didn’t bother playing it. Given that Frehley mentioned the new song, it seemed to me that it was his intention to play it but he did not bother when he got a lukewarm reaction from the crowd.

Towards the end of Frehley‘s set, the guitarist seemed to lose his bearings a little bit. First on “Shock Me”, the guitarist started singing away from his mic stand before apparently getting a little push towards the mic from presumably a roadie or guitar tech (see around 1:05 mark of video below). During “Cold Gin”, it got even worse with Frehley missing an entire verse section of the song before Coogan apparently tried to get the guitarist back on track by what appeared to be Coogan mouthing the words “focus” to a seemingly distracted Frehley (see 7:48 mark of other video below). Frehley seemingly looked a little confused at times and was very far from the electrifying performance that I had seen him perform exactly ten years ago at The Guvernment in Toronto, Ontario, Canada. I know that Frehley is ten years older as he is now 67 years old but the guitarist seemed to have aged considerably in those ten years. The songs being played were still great ones and I could see many people along with me singing along but Frehley‘s performance was for the most part pretty flat and the aforementioned miscues suggested that something was really off for him on this night.

Of note, about a week later, Frehley advised an audience at the Indianapolis KISS Expo that he was feeling pretty tired due to having bronchitis. Perhaps there lies the reason for Frehley‘s quite disappointing performance at M3 Rock Festival‘s 2018 edition.”

Interview with Ace Frehley by The Cassius Morris Show:

Fan made video for commentary only

Ace Frehley performing “Shock Me” live at the M3 Rock Festival in Columbia, Maryland, USA on May 5, 2018: