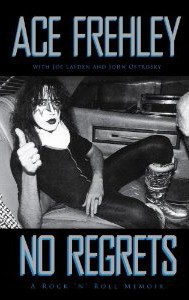 Legendary rocker and former KISS guitarist Ace Frehley will release his memoir ‘No Regrets’ on November 1st. The 288 page book, co-authored by Joe Layden, will be published under Simon & Schuster/Gallery Books’s VH1 Books imprint and can be pre-ordered at Amazon.com.

Ace Frehley is known worldwide as the legendary original lead guitarist for the seminal rock band KISS and respected as a solo artist who has influenced generations of guitar players. KISS is known for its wild make-up, spectacular costumes, and theatrical live shows (not to mention their music)! Frehley will delve into his life as a kid growing up in the Bronx, his ups-and-downs and influences which catapulted him into a life of sex, drugs, and rock-and-roll, and reveal what is was like to be one of the founding members of one of the most influential bands in the world.

In its nearly four-decade existence, KISS has sold more than 100 million albums worldwide, ranking among the top-selling rock-and-roll bands of all time. The KISS Army remains vast and devoted, buying merchandise and concert tickets at sellout shows that continue around the globe. Now, Ace Frehley, long regarded as the most approachable and likeable member of the band, opens up about his unbelievable exploits as one of the founding members of KISS.

It all started in January of 1973, when this self-taught musician and Bronx native spotted an advertisement in the Village Voice posted by Paul Stanley, Peter Criss, and Gene Simmons: “Guitarist wanted with flash and balls.” Frehley, figuring he had both, answered the ad, and the rest was history.

Within a few years, KISS was playing spectacular live shows to sold-out stadiums all over the world, decked out in their iconic costumes and makeup. The band was raking in millions of dollars on tours, albums, and merchandise, and the rabid KISS Army numbered in the six figures. Frehley, known as “The Spaceman,” had transformed from a scrappy, music-obsessed kid to one of the most famous and revered guitarists of his era, hailed by critics and adored by fans. No Regrets goes behind the make-up, the money, the women, and the partying. Frehley recounts his battles with drug addiction and his brushes with death, sets the record straight about his complicated relationships with Simmons and Paul Stanley, and describes his evolution as a musician — all with his characteristic humor and honesty. Without a doubt, No Regrets is a must-have for every KISS fan.

Ace Frehley said “I think Sinatra said it best…’regrets I’ve had a few, but then again, too few to mention.'”

Jennifer Bergstrom, Vice President, Editor-in-Chief of Gallery Books, said “NO REGRETS is sure to be the next must-read rock-and-roll memoir.”