The article speaks about Frehley‘s two departures from KISS including in year 2000.  The following are excerpts from the article by The Herald: 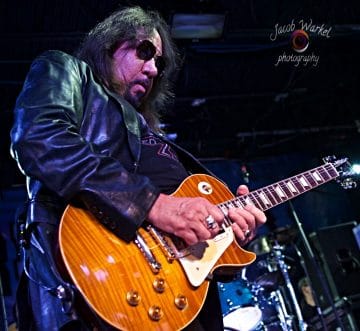 “Frehley last performed with KISS on their “farewell” tour of Australia in 2001. His departure from the band climaxed with him punching their tour manager in the head after a backstage disagreement. He tried to apologise, but it was too late.

Frehley had quit once before, returning from a 14-year spell after bridges were tended, rather than mended. Within months, the manager he belted, Tommy Thayer – a guitarist who played in a KISS tribute band – had taken Frehley’s spot (and Spaceman persona). And he’s still there.”

You can read the rest of the article/interview with Ace Frehley at The Herald.

Wikipedia talks about Thayer taking over Frehley‘s duties as follows (with slight edits):

“Kiss was relatively quiet through the rest of the year, but 2002 started with some controversy as Simmons took part in a controversial interview on National Public Radio with host Terry Gross. In February 2002, Kiss (with Singer on drums and Frehley on lead guitar) performed during the closing ceremony of the 2002 Winter Olympics in Salt Lake City, Utah. This was Frehley‘s final performance as a member of Kiss.

On March 6, 2002, Kiss performed a private concert at a resort in Trelawny, Jamaica. Frehley, who was no longer under contract, did not perform with the group. He was replaced by Thayer, who donned Frehley‘s Spaceman makeup and costume for his first live appearance with Kiss. That month, the band (with Thayer) taped an appearance on the American sitcom That ’70s Show. The episode, “That ’70s Kiss Show“, aired in August 2002. Thayer again performed with the group in April 2002, when Kiss performed “Detroit Rock City” (with pre-recorded music and live vocals) for an appearance on Dick Clark‘s American Bandstand 50th Anniversary show, which aired on May 3.

In February 2003, Kiss traveled to Australia and recorded Kiss Symphony: Alive IV with the Melbourne Symphony Orchestra at Etihad Stadium (then known as Telstra Dome) in Melbourne. Thayer once again replaced Frehley, while Criss returned to the group. This album was the first released on Sanctuary Records, which was later sold to Universal Music Group – owners of the rest of Kiss‘ catalog.

Despite claims made prior to the Farewell Tour that it would be the group’s last, Kiss announced a co-headlining tour with Aerosmith in 2003. Frehley announced that his departure from the band was permanent, stating that he believed the Farewell Tour would be Kiss‘ last, and that he did not want to open for Aerosmith. He was permanently replaced by Thayer, as Kiss moved into a post-reunion phase that saw the band easing into a new lineup, permanently featuring Thayer as “Spaceman” and Singer as “the Catman“.”