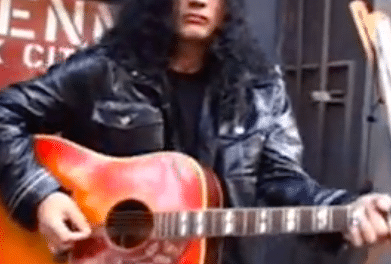 Guitarist / singer Adam Bomb has revealed today that he feels “brain dead” since October while he continues his tour throughout Europe. Back in early May 2019, Adam Bomb announced via Facebook that his band had bailed on him and he was looking for new band members to fulfill gig commitments with the first one only three days away. 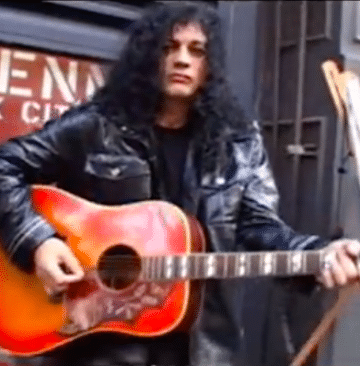 “Well that was a fun day. I wound up being late for my first gig by about three hours, which is pretty fucked up.

it was supposed to be at 1:30 in the afternoon, and for some reason I thought it was really close but it was 200 miles away and we left at noon.

They decided to put us on at night which is better for me because my lights look better and so do the fireworks when you can actually see them.

They wanted me to set up on the ground in front of the restaurant because the PA was so small. I said fuck it, and set up on the big plaza stage they set up In practically every town in Spain for all the summer festivals.

We had a lovely afternoon hanging out in the plaza. Around 8 o’clock that soundguy came with a tiny little PA system for the vocals that had about as much power as a clock radio, but it didn’t matter, we just plugged in and played the gig.

The 15th of August is some sort of holiday in Spain so everybody gets wasted on the 14th, but I figured everybody today was just celebrating my fucking birthday.

After the first gig finished we had to get to the next gig which was a midnight show, and we got to there about after midnight and set up. We went on about 1:00 AM. We played for about two hours.

The town we are in now is called Baños de Molga. There’s a hot spring here. It is like a summer town. The gig. was amazing we packed, but there is only one bar in this town. LOL

My favorite thing to do in life is play loud guitar outside, and I got to do it twice today. Pretty sure tomorrow is outside and the gig on the 17 is a big one with a mega PA.

I’m just surprised i made both these gigs today, because to be honest, I’ve been fucking brain dead since October. I’m completely disorganized and I spend most of my time thinking about the people that I have lost.

If you are following my tour, thank you. The more interest it gets, two more offers I start to get for more shows.

Like this one: I’m proud to announce that I’m playing at the Salutation in Nottingham, UK on August 24th. Fuck me, it’s 10 days away. That’s going to be a fucking sick party. RLF

Cheers again for all the birthday wishes.