Guitarist/singer Adam Bomb has released a video for his song “Stranded.” The video was shot in Amsterdam, Holland and directed by Laurent Hart and Antoine De Montremy for Les Improductibles Productions. 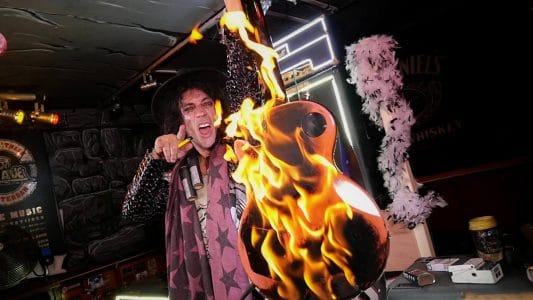 states the following regarding Adam Bomb‘s early years: “In 1979, when Adam Bomb was 16 years old, he and Geoff Tate started a cover band called Tyrant. Later he joined the band TKO, with whom he recorded the album In Your Face. In 1980, Bomb auditioned for Kiss. He flew to Los Angeles and played three songs with them, but was not invited to join the band. Instead, he moved to Hollywood and shared an apartment with Jeffrey Isbelle, better known as Izzy Stradlin. Bomb quickly became friends with Tommy Thayer, a neighbor and guitarist for the rock band Black N’ Blue (now guitarist in KISS), who suggested Adam should do his own project and call it Adam Bomb. Tommy Thayer‘s band “Movie Star” opened for TKO at The Showbox in 1981. In 1983, Adam recorded his first demos with producer Rick Keefer. He also played two gigs with Steeler as a replacement for Yngwie Malmsteen. One year later, Adam recorded more songs with the aid of drummer Chuck Ruff of Montrose and bassist Cliff Williams of AC/DC and finalized his first album, Fatal Attraction.”

Adam Bomb currently has a gig booked at The Crooked Rail in Long Island, New York, USA with Grimm Jack opening on July 9, 2016.