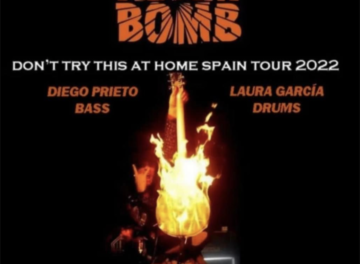 Veteran American rocker Adam Bomb has resumed his touring adventures throughout Europe and he recently completed his Don’t Try this At Home Spain Tour 2022 along with Diego Prieto on bass and Laura Garcia on drums. Over the years, Bomb has had a tendency to use different musicians to back him up for live dates depending on which countries that he plays. The singer / guitarist has a number of tour dates lined up from July 28th to August 11th throughout the Czech Republic but now needs to find two musicians rather quickly to fulfill those upcoming shows.

This is not the first time that Bomb has been in this situation. Back on May 7, 2019, Bomb posted a message on his Facebook account outlining his need for band members to fulfill his upcoming tour dates in Lithuania, which were starting three days later (on May 10, 2019). Bomb ended up finding two dependable bandmates in bassist Kozzy Havokk and drummer Leo Cakolli, and the trio toured together for the next six months throughout Europe. 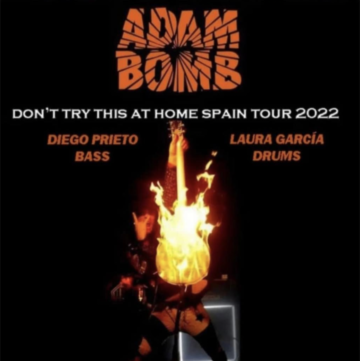 The Spain tour is now all done. I used a rental van for Spain. A VW Kaddy. It fit 4 people, a Marshall half stack, drum kit, a bass cab and 4 guitars. It was around 40 euros a day. My friend Estí kicked a dent in it trying to close the back when it was on a hill. I pulled it out with a plunger and they didn’t see the dent. I also drained the battery yesterday. The venue owner had jumper cables but they didn’t work. He drove me to a gas station where I bought new jumper cables for €20, went back, started up the van and went back to the gasolinera and returned the jumper cables and got my money back.

I returned the car just now and got my deposit back. So I was happy with that car. They did charge me 12 euros to clean the inside. I didn’t mind. I think I’m getting a bigger van in cz for around the same price.

United Airlines is offering free flight changes today so lucky me, I’m not not gonna lose my return ticket home from Spain. I’ll try to change it for Nov and stick it out around the EU until then.

I’m not using the cz musicians because they didn’t communicate with me and they want too much money, double what everybody else gets which is insane. They are not going to supply a van which was the whole reason to use them in the first place. I was told they want to be driven home after gigs within a 100km and picked up the next day. As well neither of them even drive. I found that out yesterday. So Pip and I are scrambling to get a band sorted out that won’t expect me to roadie for them and take them on a posh tour like I got KISS money. I got a day or two to sort it. I’m sure it’ll be for the best. I can’t let guys take the piss at the last minute with demands before we even play one note.

It’s very complicated touring like this but I’ll figure it out. I usually do. Anyway Spain was fabulous. It got myself started up again.”