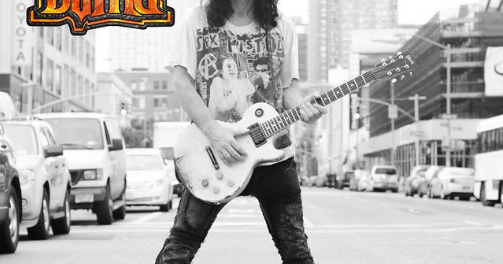 American rocker Adam Bomb has apparently recently gotten into a little bit of legal trouble and he provided his version of what happened in the following message that was posted on his Facebook page earlier today:

“FUCK!! I got arrested for looking suspicious and they took my blood. I need a fucking lawyer. In PA you can get 6 months, for a DUI, but I don’t drink. 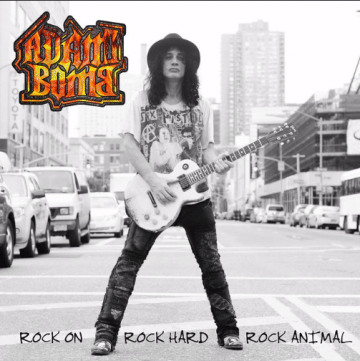 I was pulled over around 7:30 pm on Sunday the 28th of February. Three cops with three cars got out and questioned me. They approached me and said that they were unable to find my registration through my license plates, because my car is foreign and has English license plates. I proceeded to give them my license, registration and my temporary car import forms. He asked if I was on drugs. They asked me to get out of the car and had me do a field test.

First he had me follow his pen with my eyes while keeping my head still as he moved the pen left and right.

Then he had me do 9 small steps in a straight line one foot in front of the other as I counted up to 9.

Then he had me stand with one leg up as I counted up to 30.

Then he had me tilt my head up with my hands at my side while he gleamed a flashlight over my eyes for about two minutes. As he was performing this test his colleague said ‘it’s been well over a minute’ but he continued to do it anyway.

Then he had me follow his pen with my eyes as he moved it once more. This time he moved it frantically in circular motions and from side to side and closer and farther away from my face.

It was obvious that I was not impaired, yet they still made me do all of these field tests. This was going on for about 20 minutes while it was freezing outside, it was raining and I was standing in dirt and mud on ground that was not level. The whole ordeal had made me very anxious. My dog was barking from inside of the car.

After doing all of these tests I asked if I passed, to which the officer responded ‘it is not a pass or fail.’ I told him that I am not impaired to which he responded ‘well, your eyes are red.’ Red eyes are not grounds to arrest somebody. If my eyes looked red it was just a result of being outside in the cold doing this field test for 20 minutes.

He asked for permission to search my van. I asked what would happen if I said no, and he coerced me into agreeing.

He became noticeably aggravated after a few minutes of searching my van, which I suspect is the result of him not finding what he was looking for. He was aggressive in the way that he went about his search. He made a big mess, threw papers everywhere, dumped out suitcases. He was aggressively trying to forcibly open the back door that leads to the trunk while it was locked. I politely asked him to let me unlock it for him by pressing the button on my key. Overall he showed very little respect for my car and belongings while performing this search.

After concluding the search and finding nothing but maybe a three-week old roach on the carpet, he came over to me and told me that I was under arrest and he handcuffed me. Nobody read me my rights. They took my dog in a different car than me. I asked if he could stay with me because he is my registered service animal and they said no. They did not say where they were taking him or what they were doing with him, just that I’ll get him back in a couple of hours.

One of the cops got into the drivers seat of my van to move it. I asked his colleague if he knows how to drive a stick shift, to which the officer responded ‘he’ll figure out’.

Now I have a warning light on which was not on before I got pulled over which I firmly believe is the result of this officer driving my car who didn’t know what he was doing.

I was driven to Monroe County Correctional Facility about 20 miles away. He was driving about 70 mph on the freeway and was typing on the computer with his right hand while steering with his left. His eyes were not on the road, he was looking at the computer and taking peeks at the road for a few seconds and then turning back to the screen. I did not feel safe being his passenger while he drove like this. It seemed like he was in a hurry to make his quota, it being 8 pm on the final day of the month. I asked him if he’d be able to take me back to where my dog is if I did everything he asks, to which he said no because it’s not in his zone.

We arrived at the correctional facility and I was taken inside, my handcuffs were removed and I was searched. Then I sat down and I was told by the officer who drove me there that if I didn’t sign the paper consenting to a blood test or if I asked to call a lawyer that they would take my license away. I was afraid that I wouldn’t get my dog back and I signed the form consenting to the blood test and then the officer left. Then a nurse came and took two vials of my blood. They took my fingerprints and photographed me, and then told me that I was free to go. They called a cab company and there were no taxis available for two hours. I waited for the taxi in a holding cell where there was what appeared to be blood splatters on the ground, it didn’t look sanitary. I asked if it was blood and the attending officer said ‘no, it could be red paint.’ But there was nothing painted red that I could see in that whole building. All of the walls were grey.

After waiting for about an hour I asked if I could use the restroom. On my way to the restroom I noticed that many of the police officers in the station were not wearing their masks. This made me fear for my safety, I have asthma and emphysema which puts me at a high risk for COVID 19. The bathroom was very filthy, there was a half full cup of what appeared to be urine on top of the tank of the toilet.

When the cab finally arrived I was given back my wallet and I noticed that my asthma inhaler was missing from my jacket pocket. I think it fell it fell out of my pocket when the officer shoved me into his car.

I had the cab take me to Pocono Mountain Regional Police Station to retrieve my dog and my car keys. The taxi cost $70. An officer brought my dog out to me, I couldn’t see where he had been held. I asked if he had been a good boy to which he just said ‘I wouldn’t know.’ It took the taxi driver another 30 minutes to help me find my car. The policeman had moved it several feet into the woods off the side of the road which made it very difficult to find.

When I got to my car I drove it home because I was not impaired in the first place. FUCK YOU POLICE.

If they throw the book at me I’m literally a dead man for having thc in my blood. You can’t live where I do on your own and not drive, you’ll die. It’s 10 miles to the nearest store. I was told I’ll get a summons and have to go to court in month or two, but this is bs. I went so long without having to live like an outlaw.

If there’s even a chance I can’t beat this and I could go jail over a roach, I’d rather they just fucking shoot me dead. I’ve had enough heartache for one life.

If you say, oh cool, you go arrested, do a song about it, I already did years ago. I didn’t write it, but I lived it. It’s called S.U.S which stands for suspect under suspicion.

Standing on the street, just waiting for a bus
This cop pulls up, they’re giving me the S.U.S
They say, “Hey sonny, I think you’re on our file
Well, you better come with us for a while”
We got you with S.U.S

You look too obvious
You better come with us
And don’t make no fuss
We got you with S.U.S

If any angels out there can buy about 5000 of this track on bandcamp, I might be able to buy a real lawyer, but I kinda think I’m doomed. It’s outta my paygrade. I though the zoll were bad. Everything bad they say about police in amerikkka is true. I’m lucky I’m white or I wouldn’t be breathing right now.

Hellhounds on my trail.

Adam Bomb is currently looking for a drummer to tour the United States of America along with his bassist Kozzy Havokk.