Many may consider themselves road touring warriors but the ultimate road tour warrior may well be Adam Bomb. The singer / guitarist truly loves touring and demonstrated an incredible amount of determination and persistence to get his beloved black tour van back from Europe to the USA amid the Coronavirus pandemic. 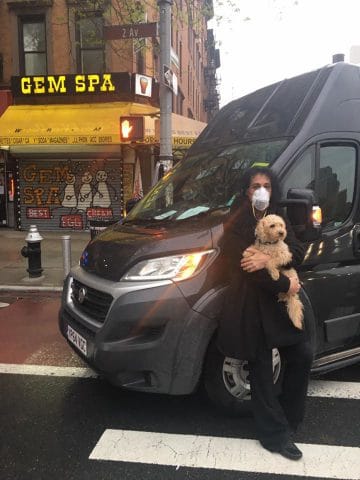 “This kinda a long post but It’s a good story.

When my tour was ending in Feb/March after being on the road for 18 months I was wishing for something to change. Of course i didn’t expect the world to shut down but it didn’t really bother me. That was a good enough reason as any. I wanted to go home with my family, which was Blaise and Pip, as well as my gear and van. They might be machines but sometimes things have soul. You can count on them like a family member, be it a guitar, an amp, or a van. And anybody that toured in my black Fiat van would tell you, it’s the best touring van in the world. We did 80,000 miles together in 18 month. We went from the UK where I bought it to Rome, Spain, Copenhagen, Latvia, Warsaw, Budapest, Amsterdam more times than I could count, that van went to practically everywhere in Europe I could drive to.

Shipping my gear to America from the UK was always easy. But I wasn’t sure what I could do with this van I bought in Oct 2018. I was getting hassled by a friend that turned on me and my insurance got cancelled and I was scrambling to figure out what I should do. I couldn’t just leave it behind. My roadie was suppose to take it to Belgium but he went home to France and the borders shut. I was stuck in the UK, Coronavirus was just starting to initiate worldwide lockdown and my friend Paul from the band Jokers happened to live in the town we were stuck in. He knew a guy that had a shipping company.

I wanted to send my van home but UK/EU vehicles are not allowed to be imported to the USA without serious bs. Most foreign vehicles do not meet EPA emissions or DOT safety standards. I already knew this from enquiring for months with an American shipping company called Mapcargo who gave up on shipping the van because of customs regulations.

Foreign cars have different safety/ emission standards. Not dangerous or bad, just different and that’s where laws come into effect.

It’s very difficult for an American to import a car back to the US from Europe. You either have to hire an ICI, there are six in the USA, the closet was in Michigan and they can set your vehicle up to pass US standards. They would need to put in US airbags, bumpers, and redo the exhaust etc. It would take a year and cost over $50,000.

One dodgy importer recommended that I get it moved to a free-trade zone at the port, hire a mechanic to take out the engine and the wheels and try to get in in as parts on a tie truck and put it back together as a kit car with some different parts but it will still not be road legal.

So many shipping companies gave up and just told me it’s not possible. I thought about selling the van but I didn’t want to give it away because of world crisis and I really invested everything I had in that van so leaving it behind or just parked off road for a year with no idea if I’d ever come back was not something I was wanting to do. 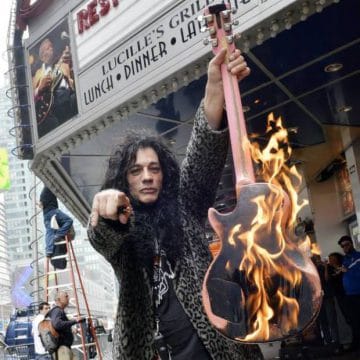 It’s like family member. I could not just leave it behind. It’s the nicest van I’ve ever owned, it’s beautiful, and the only van I don’t feel like criminal when I’m driving around.

I shipped my gear from Liverpool and told the shipper, “Fuck it. Let’s just send send the van to the US and I’ll deal with customs. There had to be a way. Shipping a van on a boat to the USA from Liverpool cost around 1200 quid. So I went for it. We got hit with a 300 quid fine at the Liverpool docks because a former friend stopped my insurance but whatever. My friend Paul got 6 points on his license. It’s like taking a bullet. But being a band leader himself, he truly understood the pressure and importance of what I was going through. I can’t thank him enough for what he did to help me. UK customs threatened to destroy the van unless I collected it but I was in lockdown in America at that point. It took some doing but he got it on the docks and it got on the boat.

I started ringing up US customs and the EPA ti figure out what to do to actually collect it once it arrives.

The US shipping brokers all gave up on trying to help me. Even the UK shipper though this van will have to be sent back and would cost another £1500 and have to be reinsured, retraced, or towed from the docks once it got back. I was gutted and nearly gave up but I just couldn’t. At this point it would break me.

I searched every loophole online and I applied for a letter of hardship from the EPA but the guy said I wouldn’t be accepted for that and even I could it could take up to a year. The EPA guy was a real stickler about the whole thing but I kept calling and asking questions.

It’s one guy that answers the EPA hotline and emails about imports. He basically shut me down. I started getting into it with customs officers in how to clear the van.

I did every thing I had to do, a lot of forms and filing docs but getting EPA clearance was main thing so without that it was not going to get through.

I asked for help from a few friends that’s owned businesses and knew lawyers but it was really way over anybody’s head on how to get my van cleared and drive it home.

I figured out my only possible option was to try and do a temporary import claiming to be a non resident of the USA. Foreign citizens can temporarily import and drive a foreign vehicle (like a camper) into the USA for one year. I figured that I had spent so much time overseas that I could claimto be a non resident. The EPA guy told me, “No you’re an American citizen.” But I didn’t give up my argument. He said if customs will put in writing that they will accept you as a non-resident, I’ll put your application through.

I went back to the customs and read CBP website that US citizens claiming to be a non-resident can do this. But I don’t have a foreign ID. So I emailed customs for the 50th time in this matter and sent them my V5 registration and a bunch of traffic fines from all over Europe to prove I had a foreign address. They sent me an email saying that customs would accept me as a US citizen claiming non-resident status.

Then the EPA guy finally told me after 3 weeks of calling him and he said that they would accept my application but it takes 14 to 21 working days to process and it still might not get approved because this should all be done before the vehicle got on the boat. This was April 29.

My van arrived in the US port in Newark on April 22. It was about to start racking up dock charges for sitting there. On the shipping bill it said the items left on the dock past seven days incur charges of $250 a day. I was panicked for a month straight about this. Excess dock charges for vehicles are much cheaper but I didn’t know that.

The CBP called the EPA guy in my behalf and asked if they release it in advance of the letter. The EPA guy told them that would be a violation of EPA regulations and federal law.

The CBP guys really tried to help me for maybe the first time in my life. I dealt with about five of them as it got passed around. I had done everything right, getting every spec of dirt of the wheels, there are serious agriculture regulations that if it doesn’t pass, they’d destroy it. But I scrubbed it before we left and it I cleared all inspections. Everything but EPA. I would just have to wait for this letter and pray they would approve it.

Then yesterday, I was told by Ports America that they were sending my vehicle to general order which means it goes into a customs hold area and would either have to be exported back or they’ll destroy it in a month. Even though I paid Ports America $238 to hold it on the docks until May 18 and customs was aware that we were waiting on letter that could take a couple of weeks. They said if was due a refund after it gets taken to general order they would let me know.

I was freaking out yesterday. I tried to call the EPA guy but he wasn’t picking up the phone. I spoke to the shipping line manager for the 10th time and she was pretty snotty about it. She said she put into general order earlier in the day and it could take a few days for customs to move it. She said lots of vehicles get sent back. It’s the law.

I’d been up and down with this van import for a month. Getting hope only to be shot down by these people claiming the authority of the government.

Then at 1:30 pm yesterday, I got emailed my EPA letter. I forwarded it to customs and they cleared my van. The customs guy called me and said you can arrange to pick up camper. It’s cleared in the computer system.

After all that the shipper told me then I would need a delivery order to collect it. The broker gave up on this long ago but I begged him to get delivery order as that what it takes. They did it and I’m going to Ports America at 3 PM and collecting my baby and driving it home. I don’t even have to see a customs agent. Just a dock agent with two copies of my delivery order.

I don’t know how things happen in my life but a more than a few times I pulled off the impossible. Playing a major rock festival in Italy at prime time without being on the bill. Playing on a record by a member of Led Zeppelin. Getting bailed out of Swiss jail on thanksgiving. I could go on but getting this van through into the US is one of the top ten unbelievable things I’ve managed to pull off in my crazy rock and roll life.

Thank you rock gods. You always seem to come through for me just when I think it’s all gonna blow up in my face.

Now if I only had my band here…”