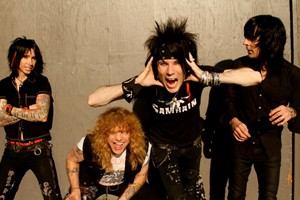 Adler Announces ‘Back From The Dead’ 2013 Tour

Adler, the new band led by former Guns N’ Roses drummer Steven Adler, announced today the first leg of their ‘Back From The Dead’ tour. The first string of shows kicks off March 2nd at Ramona Mainstage in Ramona, California and continues through late July. The band are currently finalizing the European leg of the tour, which is slated to start in mid-September. The European tour will include dates in Spain, Germany, Italy, Holland, France, Belgium and the United Kingdom with dates and venues to be determined.

“The process of making this record was incredible,” states Bunton. “Our musical influences are all over the place and this record is a perfect reflection of everything that we love about rock ‘n’ roll.” “I’m so proud of this record,” adds Steven Adler. “This is the record I’ve been wanting to make for over 20 years and now I’ve finally found the band with the perfect chemistry to make it happen!”

For more information, check out the band at www.adlerrocks.com and www.facebook.com/adlermusic.