UK based greasy rockers, Admiral Sir Cloudesley Shovell (what kind of name is that?), are releasing a new album entitled Keep It Greasy! via Rise Above Records on October 14, 2016. 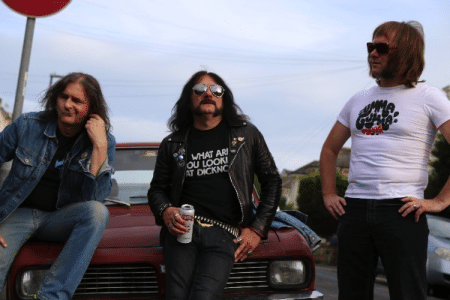 “There seems to be an endless horde of fresh-faced bands that proclaim to be resurrecting the spirit of rock n’ roll these days. They see themselves to grabbing the genre by the scruff of its neck and dragging it back to its supposed glory years. Yet, few bands can say they’ve lived the lifestyle quite like Admiral Sir Cloudesley Shovell. These working class grease rock bastards, fuelled by speed, cheap lager and roadside fry-ups, have the scars to prove their worth.

The thing is, The Shovell has never claimed to be the biggest or the best around and frankly they don’t care who is. There is no brash egotism at play here, just a rough-and-ready honesty which permeates in what these three guys do. Their songs haven’t washed in weeks, far too busy spinning crackling Budgie vinyls, knackered Motörhead live albums played at a sluggish RPM and snorting self-inflammatories to do anything hygienic. If you want your music dressed up to the nines like an American prom queen, look elsewhere.

Here’s a band proud to be the soundtrack to your weed smokin’, beer swiggin’ escapes from 2016’s dystopian shitstorm reality; one feverishly decorated with unrelenting commercialism, villainous politicians and godforsaken auto-tune. There may be thousands of musicians who can play their instruments better, write more intelligent and thought provoking music, but when you listen to rugged and guttural ‘tune in, drop out’ vibes of Keep It Greasy, none of that seems to matter.

Their approach to sound and texture makes this record feel like an undiscovered gem from 1971, time worn, warts n’ all. Its beauty is defined, rather than hindered by, its unkempt primalism. As a record too, it displays an improved sense of how to get your heart battering your rib cage – think rattling Geezer Butler bass, gravel-toned vocals and the freewheeling madness of Keith Moon. These new songs are using the tried and tested Shovell formula to find new ways of getting under your skin.

From the jolting opening sex-pest boogie of “U Got Wot I Need” to the sandpaper smooth, Zeppelin stomp of “Tired N’ Wired” – its lyrics straight from Lemmy‘s freight train of thought – they make the last three decades crumble away. Longer tracks like “Hairy Brain Part 2”, “Paid In Full” and album closer “Wrong” are peppered with many of rock’s cornerstones – twisting harmonies, driving shuffle rhythms and whirling feedback – but never sound impressionistic. They simply absorb you, swallow you whole.

But this is no mere pastiche that cashes in on society’s occasional backwards-glancing, nostalgic tendencies. This is down-to-earth and real. Keep It Greasy documents the trials and tribulations these sleezeballs have been through while on the road and beyond. 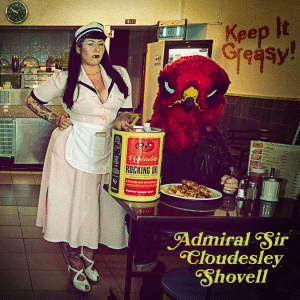 releases can be – but it is hellish fun. Stick it on at a neighbour-unfriendly volume and enjoy it for the sordid, fucked up time warp that it is and see for yourself.

Directed by Mark Richards.Taken from their forthcoming monumental second album Check ’em Before You Wreck ’em. These long haired greasy ‘erberts from Hasting…