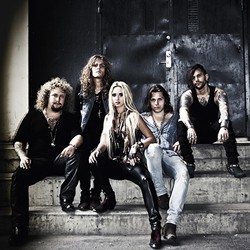 Adrenaline Rush have just announced that they have signed a record deal with Frontiers Records to release their debut album later this summer.

Fronted by one of the most talented and hottest chicks in today’s hard rock scene, Tave Wanning (formerly part of the teen-pop duo Peaches), Adrenaline Rush promises to fire up the rock scene with their lethal dose of heavy guitars, infectious hooks and full blown rock ‘n’ roll attitude.

With a debut album recorded under the direction of producer Erik Martensson (Eclipse, W.E.T), this impressive band needs to be on the ‘to buy’ list for all fans of Danger Danger, Motley Crue, Warrant, Treat and Crazy Lixx.

Wanning says, “I am very excited to finally expose my rock soul with my band. I’ve always been a rocker at heart and if you’re into ’70s/’80s style rock I am sure you will feel right at home with Adrenaline Rush. Enjoy!”

Frontiers will launch the band with the release of their first video/single “Change” in the spring with an album to follow in the summer of 2014. The band will also play some selected live appearances in Sweden and at some festivals in mainland Europe. More info at www.adrenalinerush.se.