Iron Maiden guitarist Adrian Smith was recently interviewed by Jimmy Kay for Canada’s The Metal Voice. The guitarist was promoting his memoir Monsters of River & Rock, which was released on September 3 2020.

In terms of his new book, Smith indicated (as transcribed by The Metal Voice with slight edits): “It’s primarily a fishing book but it is not overly technical. A lot of fishing stories and what happened around the fishing, traveling to and from fishing. Sometimes the fishing and the music literally cross lines like when Maiden were doing the Powerslave album in the Bahamas 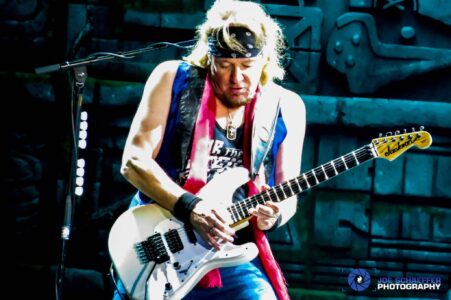 at Compass Point Studios (I always take my fishing rod wherever I go). So when I had some time off, I was fishing outside the studios in the Caribbean. I cast out and I got tangled up with another line and it turned out to be Robert Palmer, [the] ‘Addicted To Love’, that guy, who came out running from his balcony and told me off — literally like that. The book is full of stories like that. Later on, Robert Palmer turns up  in the studio this time when I was recording a solo. This is a whole other story. All these things happen on my travels. When I actually got the physical book, I was surprised there was so much music content in there. I would say it’s 30% broader stuff about me personally and stories on how we wrote certain songs (Iron Maiden), situations we found ourselves in the studio as well as fishing stories and travel of course.”

When asked about his relationship with former drummer Clive Burr and his feeling when he was let go from the band, Smith indicated: “Clive and I used to share a room together. He was a great guy and he was a very funny guy. Let’s say he embraced the rock and roll lifestyle maybe a little too much and that’s why he ended up leaving the band. He was a great drummer and a great guy but it got a bit much for him and so we had to make a change. So that was very sad and I know Bruce had said subsequently and I think he said it at the time, I wish we had more time, to take more time off so he could have sorted himself out but we just didn’t have the time then. We would finish one tour and go straight into another one. That is the way you had to do it then — tour, tour, tour. The same thing happened with Paul Di’Anno. It’s tough and it happened to me. It can get on top of you, a young guy and you have to perform every night and mentally, it can be quite tough. You have a lot of down time as well to sit around thinking about stuff in your hotel room. Of course, you end up drinking too much and that spirals. This life doesn’t suit everybody.”

You can read other excerpts of the interview with Adrian Smith at The Metal Voice‘s website and/or listen to the interview below: